This is important news. Taylor Swift has officially followed Pewdiepie – after years of desperate begging.

It is clear that fervent Swiftie Pewdiepie’s life has officially peaked – and it’s all downhill from here.

Taylor’s Twitter account was also hacked today by Twitter user @tempveri, who is now suspended. The hacker leaked her direct messages to Nick Jonas…and even a few with Pewdiepie.

Pewdiepie Has Been Begging for a Taylor Follow for Years

Pewdiepie has been tweeting Taylor relentlessly since 2013.

He likes to call Taylor “senpai” as a term of endearment. “F**k, senpai, answer me damnit,” he begged.

He begs her to notice him all the time on Twitter. 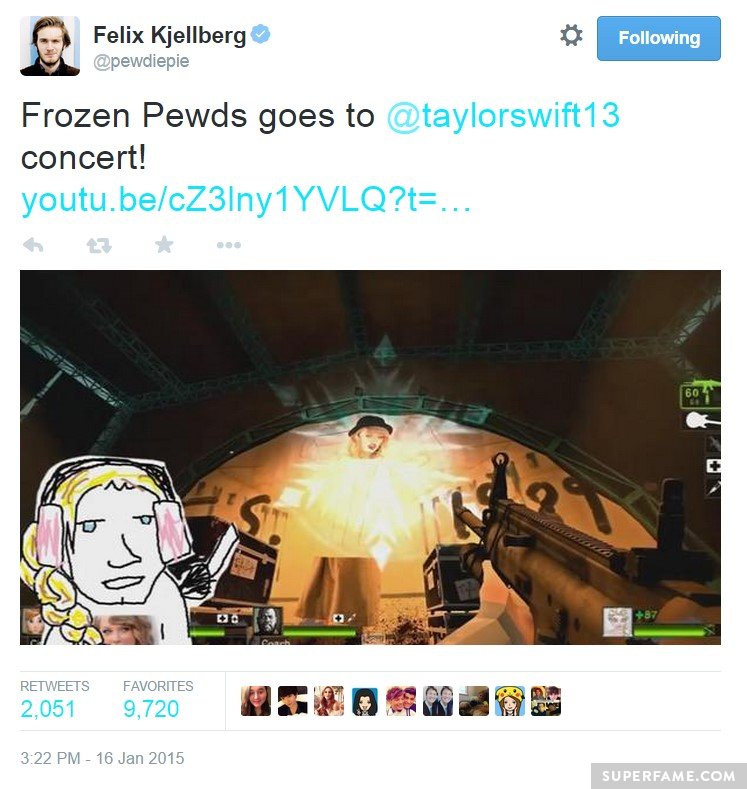 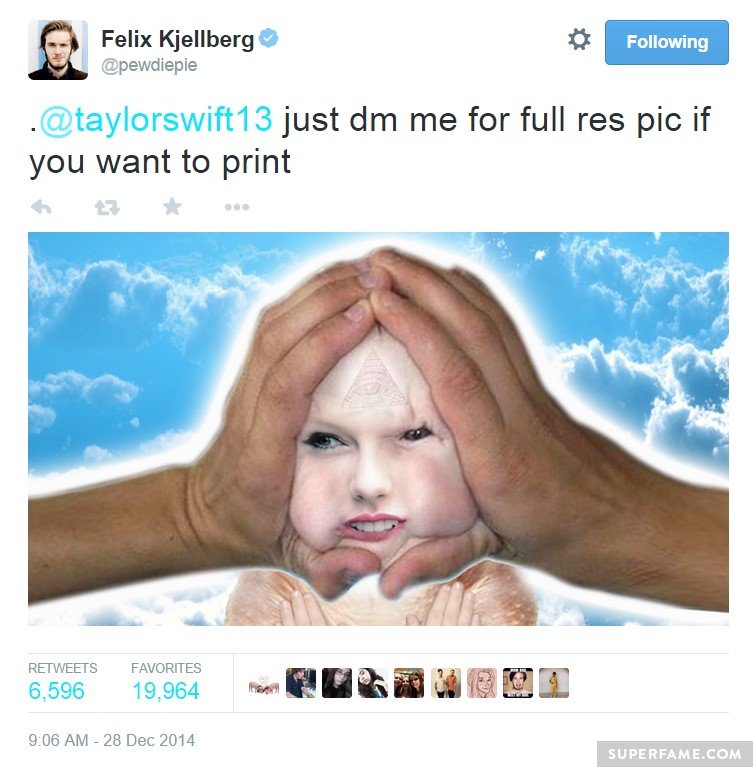 Pewdiepie Steps up His Game during January 2015, Threatens to Become an Ellie Goulding Fan Instead

This month, Felix went even more Taylor-crazy, and decided to give Taylor an ultimatum – threatening to become an Ellie Goulding fan. 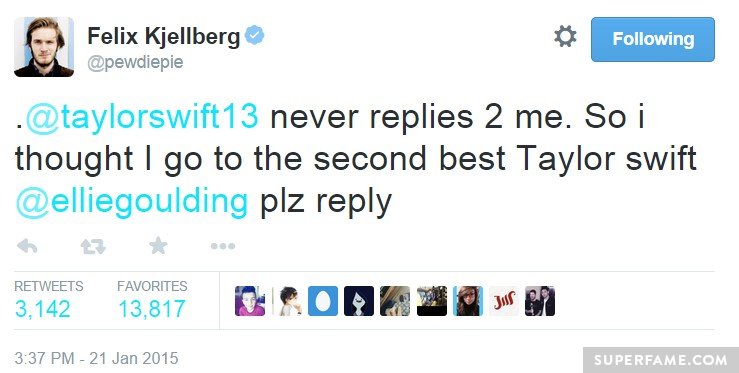 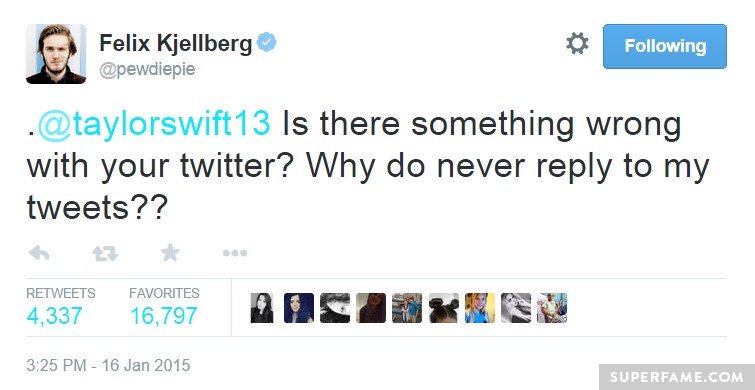 What Was the Tweet That Finally Got Pewdiepie Noticed?

His dreams finally came true, when Taylor (or her social media manager) noticed the following tweet.

He posted a side-by-side comparison photo of his “similar fashion style” and proclaimed them to be best friends. 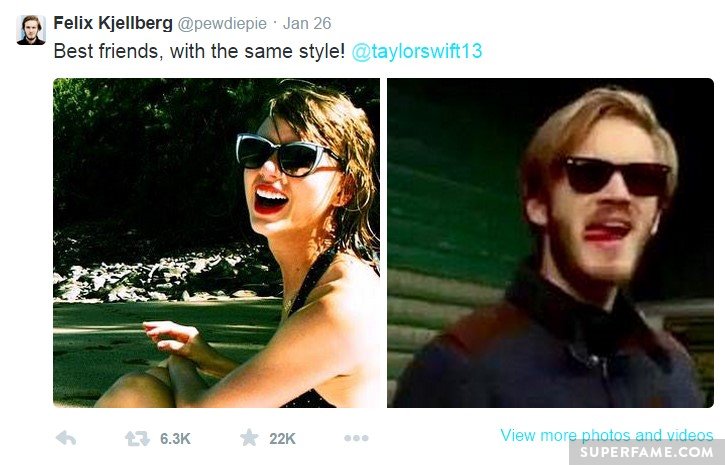 Senpai Swift took pity on poor Pewds, and finally gave him a follow.

“WAIT, WHAT? Senpai has finally noticed me! This gives hope to fans all over the world,” he announced. 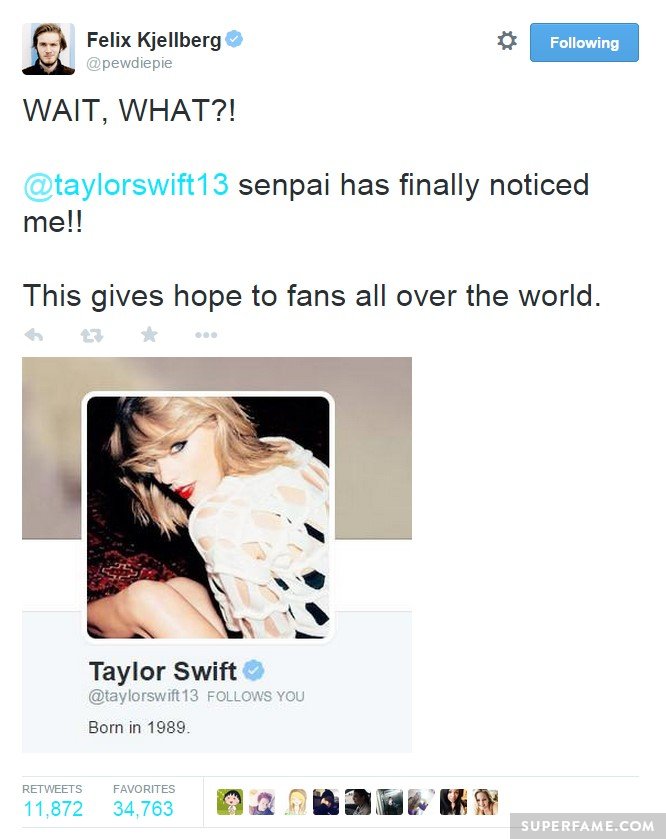 In a separate incident, Taylor was also hacked, and the hacker decided to release a few innocuous tweets with some of her celebrity friends like Nick Jonas.

However, he also posted DMs from Pewdiepie.

Of course, it could all be Photoshopped, but Taylor confirmed the hacking itself.

“Nice to meet you! (It’s not brunch, but it’s something. Haha, you’re cracking me up with the BFF posts! How’s your 2015 going so far?” Taylor asked.

“Nice to meet you as well! Don’t worry, we can save brunch for another time! Haha, see, no one believed me when I said it. Shows them now! Pretty great, thanks. How about yourself?” Pewdiepie replied. 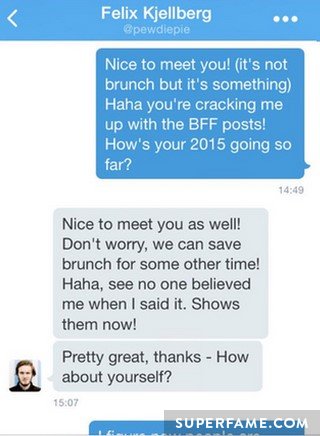 Taylor wasn’t too worried about the DMs, but immediately shot down a different rumor related to the hacking.