Only positive comments are allowed on PointlessBlog! Alfie is not a fan of viewers that leave negative comments, and threatens to stop daily vlogging altogether like girlfriend Zoella.

In a shirtless daily vlog rant, Alfie even threatens to turn off comments like Pewdiepie if conditions do not improve in his comments section.

This outburst comes after fans called him out on his flippant use of the term “OCD” in a previous daily vlog. Fans also questioned Zoella’s controversial a**-poking of Jim Chapman on a previous video – by the way, we’re not kidding on that one.

Alfie Defends Zoe Over Her A**-Poke of Jim Chapman

In the rant, Alfie flips open a laptop in bed and begins to scold his viewers. He begins by introducing the first issue – Zoella’s “poking” of Jim’s behind.

“Today, there are two main things people are going nuts about. Number one, the fact that Zoe poked Jim in the bum [in the previous video called Secret Chocolate Stash].”

It is not surprising that viewers are now more sensitive to such issues, considering Sam Pepper’s recent YouTube exile. However, in this case, it was consensual a**-poking between friends, Alfie says.

Zoella adds, “He had jeans on.”

Alfie continues, “His bum wasn’t out, he wasn’t in boxers. So, Zoe poked Jim’s jeans, and people getting cross. If it was an issue, then Jim would have acted annoyed. Like, you guys need to chill out, seriously now. I’m saying this in a serious tone. Chill out. I don’t like it at all. I really don’t like it at all!”

Alfie Defends Against ‘OCD’ Criticism: “One in Every Three Comments Is Negative in This Video!”

Alfie then addresses the second issue – the fact that he flippantly used the term “OCD” in a conversation – which some viewers took offense to.

“The number two thing people are mad about… is the fact I used the word ‘OCD’ in a video about being tidy. I know that OCD is a very serious mental disorder!”

“OCD is often characterized and used by many people – not just myself – as a term for meaning that people need to have things very tidy. Whether that is true or not is another matter.”

“But you guys – just because I used that one term very, very offhandedly, doesn’t mean you have to go in!”

“I mean, one in every three comments is negative in this video – mainly about OCD, or very rarely about Zoe poking Jim in the bum.”

“Chill out! Chill out guys! I didn’t say anything offensive,” he says as his voice starts rising and Zoella laughs in the background.

Alfie then describes the types of positive-only comments that he would like to see on his videos.

“I’m making daily vlogs to be fun. I should be reading comments about people being like ‘oh my god, at one minute and a half he says this’ or ‘this bit made me laugh’ or ‘I liked this bit’ or ‘you should do this tomorrow’, or ‘I saw this thing in Brighton that you and Zoe should do together’.”

“Not ‘oh, I can’t even believe Alfie and Zoe having a bath together’.”

Many fans also agreed with Alfie, and defended his views.

Alfie then says he never complains or moans about anything. “I’m actually moaning now, I never moan about anything, but I’m being serious,” he warns.

“I won’t do daily vlogs when all of you are so negative.”

Zoella then adds her two cents, and warns viewers of what their negativity might do.

Zoella says, “This is why I stopped daily vlogs, guys. It SCARES me. It shouldn’t have to scare you to go into the video and look at the comments. Everyone should be happy and positive.”

She then threatens, “It will mean Alfie won’t do them anymore.”

Alfie then threatens to disable comments and says, “I don’t want to have to do what Felix – Pewdiepie – did, and just turn off all the comments.”

“You have a choice. You can be positive or negative. But I only like positive people.”

However, Alfie’s pleas for completely positive comments did not seem to dissuade commenters from giving “negative” opinions. Unfortunately for Alfie, almost every single top comment was negative. 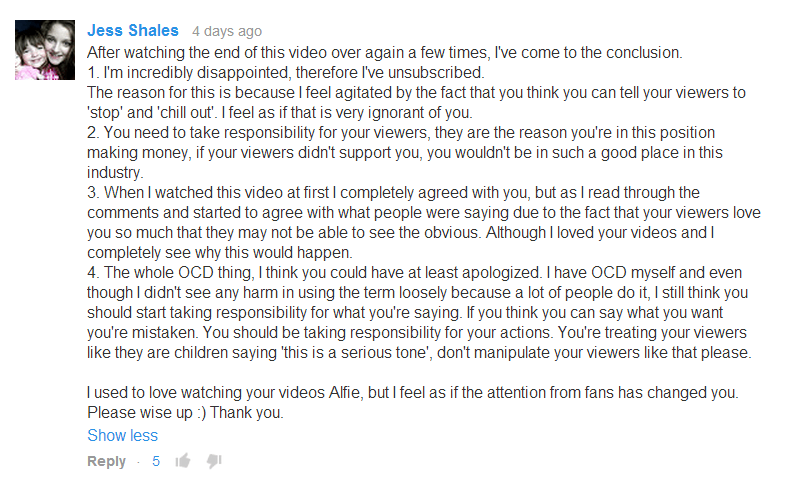 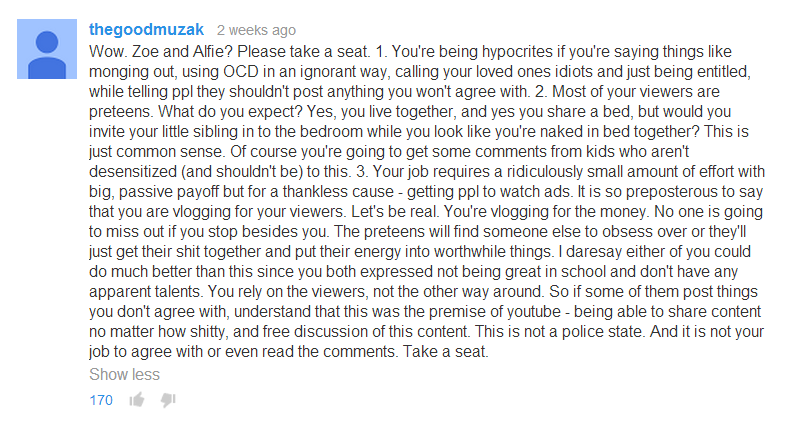