Kalel Kitten is sick of “haters” leaving mean messages about her big nose, bad skin and “ugly” body on her Instagram account. “Just let me rant. I just can’t with these people anymore,” she exclaims.

She even reveals that she once contemplated plastic surgery to fix her b**** and nose.

Kalel Wants You to Stop Hating on Her Face

Kalel lists a few common criticisms people attack her with.

“Oh my god, you’re pretty, but your nose is way too big! It’s MY nose! Your eyes are way too close together. Your ears look like Dumbo. Your skin is way too dark,” she says.

“Take a step back, do you think YOU’RE f**king perfect? Really? You think there’s nothing wrong with YOU?”

Kalel Says Her “Bad Skin” Is Genetic & Can’t Help It

She then explains that her “poor skin” is genetic, and she has tried everything to rid herself of acne. “This is my f**king face!”

Kalel often gets criticized whenever she goes without makeup – like in this video, where Kalel vlogged makeup-free – resulting in a brutal comments section attacking her looks.

Kalel Says She Considered Plastic Surgery for Her Nose & B****

“I have had moments where I have considered plastic surgery. Like REALLY considered.”

“With what I do, I feel a lot of pressure to be perfect. It would, on some level, make my life a little bit easier if I did have the perfect nose & slightly bigger b****.”

Kalel Makes a Controversial Comment About Pregnancy: B**** Turn to S**t!

“But I don’t think I’ll ever do [plastic surgery] Unless I end up having like five kids and my b**** just turn to s**t,” she cackles.

This comment caused some controversy, with some claiming it invalidated her “everyone is beautiful” message. 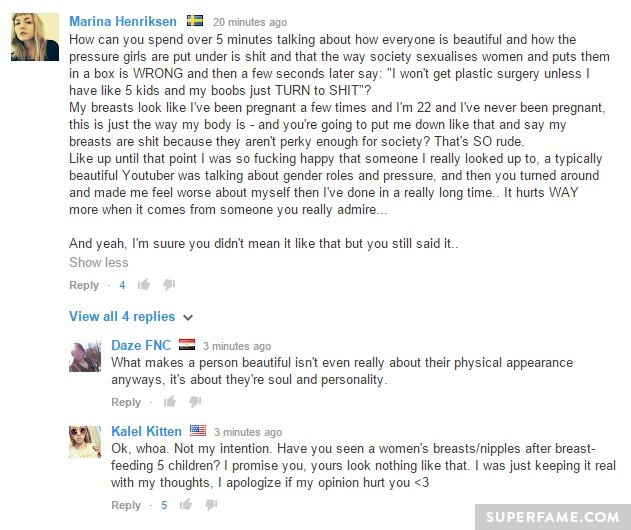 Kalel even had to respond, saying, “Ok, whoa. Not my intention. Have you seen a woman’s b****** / nipples after breast-feeding 5 children?”