Anthony Padilla has revealed that he is staying a vegan, despite his recent split from fiance and occasional vegan slacktivist Kalel Kitten.

According to Anthony, he has been a vegan since February 2013 – although evidence says otherwise.

Immediately after the split was announced, Anthony was barraged by tweets asking if he was considering dropping veganism.

Anthony Responds to the Vegan Question

Anthony responded, saying that he was not about to start supporting the “pain and suffering” of animals – confirming that he has changed his lifestyle for good. 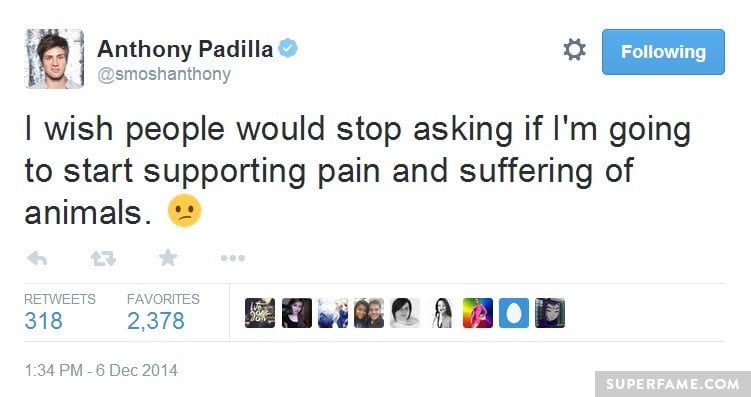 Why Did Fans Think He Would Start Eating Meat Again?

Anthony’s newfound vegetarian lifestyle is such a hot topic amongst fans, mostly because fans believe that ex-fiance Kalel Kitten pressured him into it.

Therefore, fans were wondering if he had decided to change his mind after the split.

On their WatchUsLiveAndStuff vlogs, it was clear that Kalel was initially interested in the vegan lifestyle first – with Anthony only joining in later.

However, Anthony has claimed that he was not “forced” into animal activism by Kalel, and that he made his own decisions.

He claims that he did his own research, and came to his own conclusions.

Do you believe Kalel did not play a role in Anthony’s vegetarian transition? Comment below!