Drew MacDonald came out on Twitter last week, and was floored by the positive reaction. “This week has been absolutely insane. I have never felt so loved, supported and accepted in my entire life.”

“I’m gay. But more importantly than that, I have never been so happy and comfortable with who I am.” 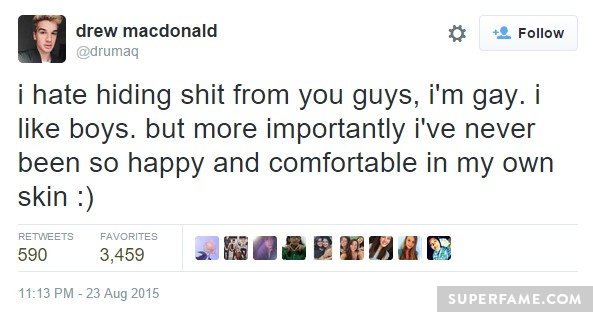 “It’s such a scary and uneasy feeling to not be proud of who you are,” he said on YouTube.

“A lot of people don’t know this, but my sexuality has been something that I have struggled with my entire life, up until a couple of years ago.”

“Growing up, I knew that I was a little bit different than everyone else.”

“I kind of convinced myself that I wasn’t normal. But the thing is… I am normal! The new normal.”

“Just because I am now openly gay, doesn’t mean that I am a different person. I might talk about boys a little more often now.”

“I know there are still many people that don’t understand it. And maybe never will. But the majority of us do.”

“I didn’t want to make a coming out video, because I don’t think coming out should be a big deal at all.”

He previously talked about an awkward encounter while kissing girls in high school.

“My transition from grade 8 to grade 9… I cut my hair, lost the glasses. I gained some confidence. And in grade 9, had my first kiss. So obviously something worked out for me.”

“My first kiss was kind of awkward. It was more of her kissing me and me kissing back. She kind of forced me into it. I’m glad she did because I was so nervous and awkward… that I could not have made the first move. We were in her basement.”