Eva Gutowski went on Snapchat to put her ex-boyfriend Alex Hayes on blast – and also told fans to stop “bullying” him.

If you visit Alex on Instagram, you’ll see that his comments are FILLED with snake emojis and people calling him a “rat”, a “cheater” and more.

The couple had a messy breakup and say that they are still working towards a resolution.

Eva was on Snapchat (her account username is evadancer94) when she broke down in tears.

“The past five months of my life have been extremely difficult,” Eva began. “Someone who I thought was really amazing… I still do think he is a good person deep down. Um, did a lot of things that I did not think were possible to do to a person. And I did not find out until after.”

“I’ll explain. Basically, I was in a relationship and it was not working out. And we decided to end it. But we were still friends. And were on great terms. And I still loved him. The whole time during the relationship, so much was going on. And my mom was saying this isn’t right. My friends were also saying that this isn’t right. People around me were saying this wasn’t right. And I was dumb and I stayed.”

“Basically after we broke up everything was totally fine. Then I found out a lot of things that I did not know were going on during the relationship… that were REALLY, really bad.”

“To find out that your entire relationship might have been a lie, and the person that you loved might not have ever loved you. And probably did not.”

“This stuff that I have heard about me. The things that are being spread about me from somebody that I loved so much. It is hard.”

A little while ago, Eva posted this tweet comparing her ex to a snake. Her fans knew she was talking about Alex, and his social media accounts have been flooded with snake emojis ever since. 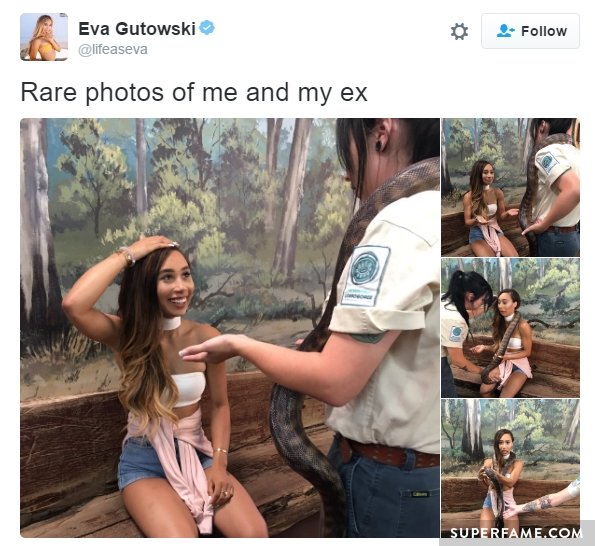 “I just wanted to make this Snapchat in hopes that you can understand that I am just trying to work through what happened to me.”

“I am trying to work it through with Alex because I do not hate anybody. And neither should you. So please stop talking about it. Let’s just move on. Please, for me. Please let me handle it with the person that it is with. “