Shane Dawson and GlitterForever17 were caught in some drama. (Photo: YouTube)

Shane Dawson and GlitterForever17 recently released a pair of collaboration comedy sketches on their respective YouTube channels – and neither has gone down well.

In fact, a ton of fans reported Shane’s video and it was eventually flagged.

On Shane’s channel, he released a comedy video about life hacks, with a suicide joke tacked on at the end.

“I am not going to say this out loud,” Glitterforever17 said in the video, “But there are two ways to do this.”

She lifts up a gun and what appears to be a noose. “One is a lot less messy. I would go with the noose in my personal opinion.”

Shane then takes the noose and the scene cuts to the psychic twins. “Did he just kill himself? Yeah. Didn’t take a second to see that one coming. Ha! Hahaha.”

A ton of commenters attacked the video. “Making light of suicide is NOT FUNNY,” a fan wrote. “Coming from someone who has attempted suicide, it is really NOT funny. Sorry, I just unsubscribed. This makes me feel so bad. You took it too far. It’s offensive and f****** awful to people with f****** depression.”

After tons of people reported his video, it was flagged and age-restricted.

On Breland’s channel, her video was themed around murder, and had even more haters on it.

“Your content is f****** awful and s***,” a top comment wrote. “This is the most pathetic thing I have ever seen. I’m unsubbing! Little girls watch this channel.”

Breland took to the YouTube comments to address the backlash. “This is a JOKE!” she told fans. “Lighten up please. We wanted a little praise for our hard work… not offend anyone.”

She said her haters did not understand “dark comedy”. “Please don’t watch. A little pat on the back is all we ask from you.”

Shane went on Twitter and posted a screenshot of a fan’s comment. The commenter said that the video was reminiscent of the “old Shane”. “People get too triggered nowadays.” 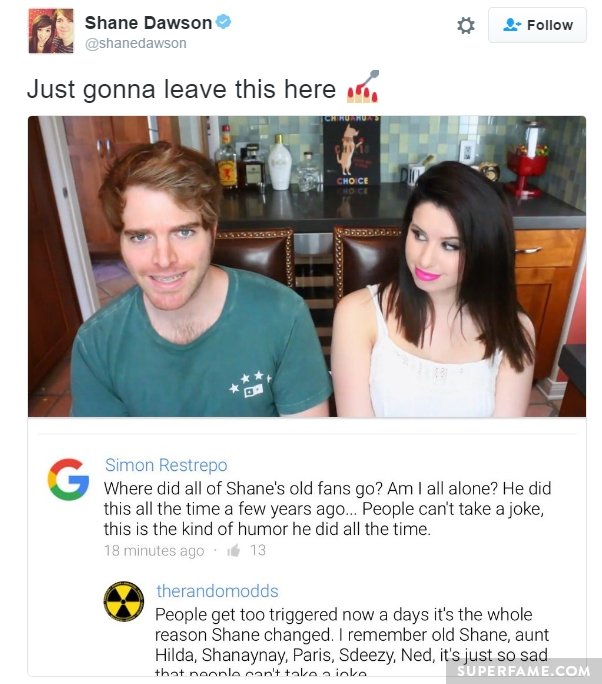 “It makes me sad,” Shane wrote.

Do you think the video should have been age-restricted?