There were very high fan expectations for Hannah Hart’s My Drunk Pumpkin this year, which resulted in some drama.

As more and more YouTubers aspire to be taken “seriously”, fans are responding to their content in the same way they would for any other traditional medium.

Fans get annoyed when “shows” aren’t on schedule because a YouTuber is “too tired”, have “bad” episodes or too much product placement. Unfortunately for Hannah, fans thought her latest video was “lazy”.

This was the “controversial” video that fans complained about.

As a comparison, here is My Drunk Pumpkin from 2014.

Almost all the top comments were negative – some with thousands of upvotes. “Are you kidding me? We get one little round of half-a** watermelon decorating? What the actual eff?”

Some wrote very long comments. “Many creators on YouTube are selling out more and more, and putting less and less effort into their videos. It feels like you are just churning out a video to make money off of us.” 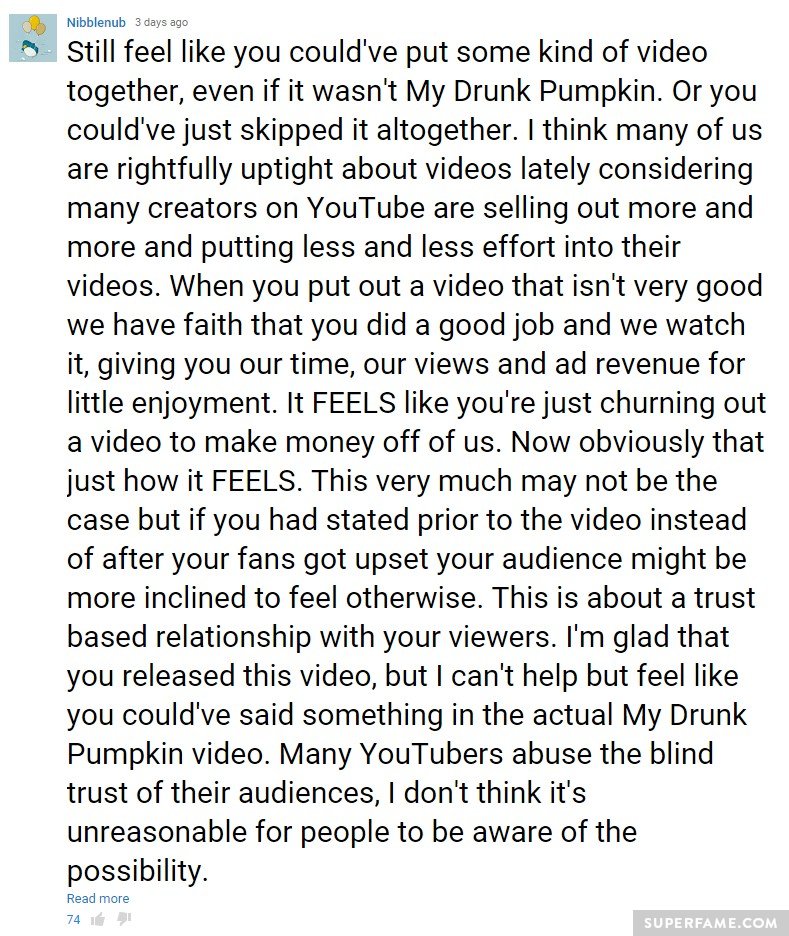 Even die-hard fans were upset. A user named “Mamrie Harto Helbig” wrote, “First Holy Trinity video I have EVER thumbed down!”

Fans wondered if the video was simply a trailer for the real thing.

Mamrie Hart Helps Defend Hannah, Says They Were “Too Drunk”

Mamrie helped to defend her friend Hannah by posting in the comments. “We ended up getting drunk enough that nobody needed to see that footage,” she explained. 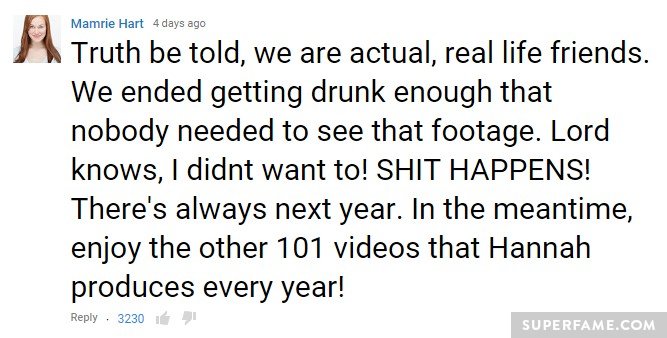 Hannah Explains Her Side of the Story

Hannah felt compelled to respond to the backlash in a video.

“The one mini-tradition that we have here, is collaborating with Grace and Mamrie and doing My Drunk Pumpkin.”

“Basically, Grace, Mamrie and I aren’t actually a group act. We are all three separate people with solo careers and solo lives. Incredibly busy and complicated schedules.”

“And I, in all my best efforts to try and coordinate My Drunk Pumpkin, and making it happen – I really tried to fit it into everybody’s schedules. We had an original date and that did not work. And that had to get moved. So we had a secondary date.”

“So by the time we actually got together to film that night, it was decided that we would film for Grace’s channel, film for Mamrie’s channel and THEN film My Drunk Pumpkin.”

“Given all our incredibly busy schedules. Everybody was a little exhausted. By the time we got around to filming My Drunk Pumpkin… I don’t think we were on our best form.”

She said she debated whether to can My Drunk Pumpkin entirely, but decided to work with the existing footage instead. “I laughed! I think some of you guys laughed too.”

“Some of the comments did get to me, especially since I worked so hard to get myself organized this year.”

“The reason why My Drunk Pumpkin was short, is because we are all really, really busy people who were very, very tired. But we really tried to knock ’em all out.”

“I don’t usually let comments get under my skin. But when I see like, ‘I bet Hannah was just too lazy to edit the whole thing’ I just gotta be like… guys! I am not a lazy person.”