Shane Dawson is not a fan of hoverboards. (Photo: YouTube)

It’s impossible to miss the “hoverboard” trend that is taking over the YouTube & Vine community by storm.

Some YouTubers even film their entire dizzying vlogs while rolling around on one, causing fans to complain in the comments. They bring them to basketball courts, offices, airports, swimming pools – even overseas.

While the gliders are popular and loved by many – not everyone is a fan. Shane Dawson recently dubbed them “stupid f****** Viner gliders”. Additionally, when Julien Solomita gifted one to Jenna Marbles, she joked, “We can be f****** a*******.”

There is no agreement on a widely accepted name for the gadget yet, because none of the “companies” actually own the original patent and are simply re-selling legally-dodgy Chinese products.

This is because anyone can buy them for $200 from China, tack on a branded logo, then multiply the price by 10 for resale.

Supposedly, the original patent is owned by Inventist, and sold under the name Hovertrax. They are finding it legally impossible to handle all the copycats.

The gadget is so popular that it’s probably easier to list YouTubers that don’t have one.

“You really missed out at VidCon, because there were many people on these automatic things,” Joey Graceffa said to Shane in a vlog two weeks ago.

“Those stupid f****** Viner gliders… they are douchey enough that they don’t need to be gliding,” Shane fired.

When fans accused him of shading Trevor Moran, he said, “He’s actual royalty that should not ever have to walk.” 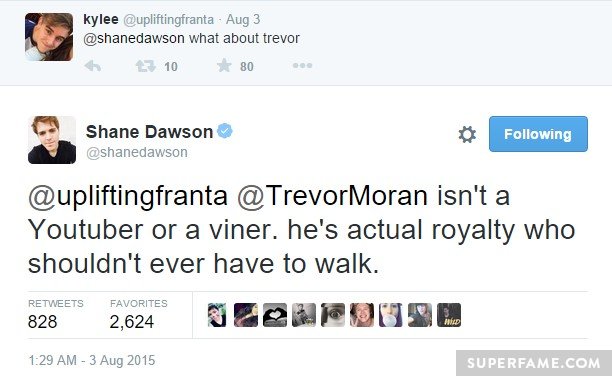 Fans React to Everyone Getting a Hoverboard

Fans everywhere noticed the trend. “Are you really a YouTuber if you don’t have a hoverboard thing?” one fan asked.

Some fans were even convinced to buy one. “I need one of those cool hoverboard things!” one said.

Many complained. “I want to steal every YouTuber and Viner’s hoverboard and watch them cry!” one fan threatened.