For Throwback Thursday, we’ll be going back one month – to when Jack Dail quit social media.

It might already be Thanksgiving, but fans are still mourning Jack’s abandoned social media accounts.

A month ago, Jack posted the following message on Twitter. “God has a plan for everyone!” he tweeted.

He revealed that he wanted to focus more on school.

“I should probably explain myself, because not a lot of people understand. So, recently, in the past couple of weeks, a lot of signs have come up in my life which have led me back to school – and doing things I have always loved doing growing up.”

“Unfortunately, none of those things included social media!”

“So, as of now, and the future, you probably will not be seeing a lot from me… Just because I am just a normal kid like I have always been.”

“This was all one hell of a road while it lasted. Just was not meant to be in my life forever.”

“Loved all the experiences and meeting everybody. Thanks for everything.”

This was his last YouTube video, from back in September.

Signs of Life: A Week Ago, Jack Posted This Photo on Instagram

Jack fans were super nostalgic on Thanksgiving. “I am thankful for Jack Dail, even though he is annoying,” a fan tweeted. 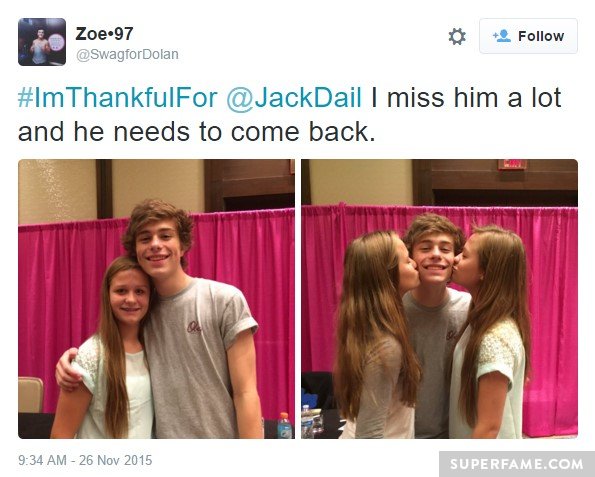