British YouTuber Jake Boys recently made an embarrassing gaffe for a gift to his beauty guru girlfriend Emily-Victoria Canham.

Jake, who claims he was often kicked out of geography class, accidentally bought flights to the capital of Ireland.

Jake Boys, 19, and girlfriend Emily Canham, 18, both love One Direction – so it’s no surprise that Jake decided to spring a pair of surprise tickets for Emily.

“Jake tried to surprise me with One Direction & McBusted tickets for Cardiff,” an excited Emily tweeted.

However, there was one big problem.

“But he booked flights to Ireland, because he thought Cardiff was in Ireland,” an amused Emily continued. 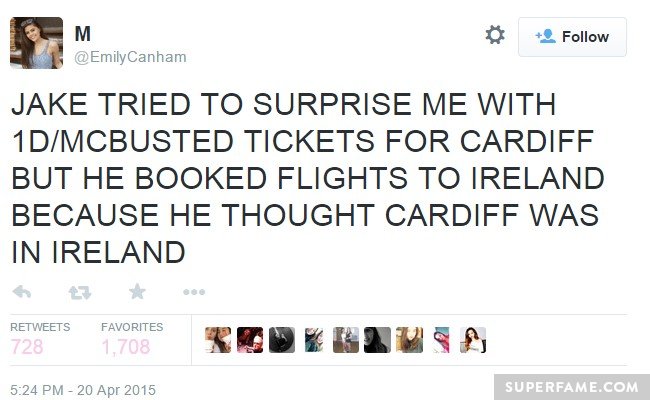 “I’m SCREAMING,” she tweeted in all-caps.

Poor Jake’s mistake was then reported on by a variety of big media outlets in the UK, including the Daily Mail, The Mirror / Wales Online and ITV.

“Woke up and I am in the news for being dumb! I’m actually pretty proud of myself,” Jake tweeted.

“I hope my old geography teacher sees that I do not know where Cardiff is. Might show him that kicking me out of every lesson does not help,” he joked. 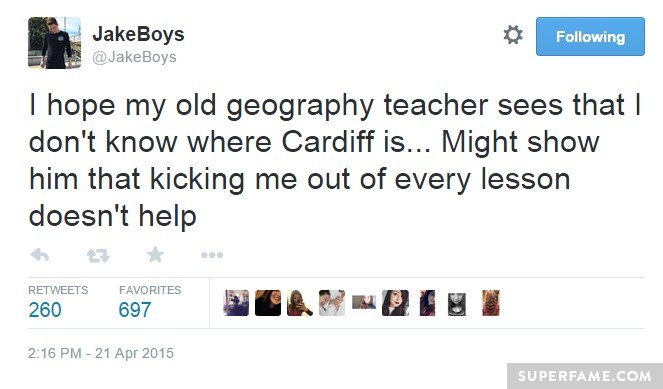 Jake has now decided to purchase train tickets to Cardiff for the concert in June, instead.