Jeffree Star was NOT happy with Sam Smith after he followed his boyfriend Nathan. (Photo: Instagram)

This is also not the first time Sam has been accused of creeping on Instagram – and Sam is allegedly dating somebody right now!

For some reason, Jeffree Star appeared to be quite upset and annoyed after it was revealed that Sam Smith followed Nathan on Instagram. “I can’t,” Jeffree wrote.

“Like, really? Nothing shocks me anymore,” Jeffree said on Twitter – and even added three “knife” emojis for good measure.

Some fans thought that Jeffree was only kidding, but Jeffree’s Snapchat said otherwise.

Some fans accused Jeffree of overreacting. “Seriously? He’s allowed to follow whoever he wants,” one fan tweeted.

If you take a look at Sam Smith’s Instagram account, you might notice that he follows a lot of sexy men. It also appears that Sam has already unfollowed Nathan.

After the Oscars, Sam Smith was accused by Oscar-winner Dustin Lance Black of texting his fiance Tom Daley.

“It may be time to stop texting my fiance!” Dustin wrote. 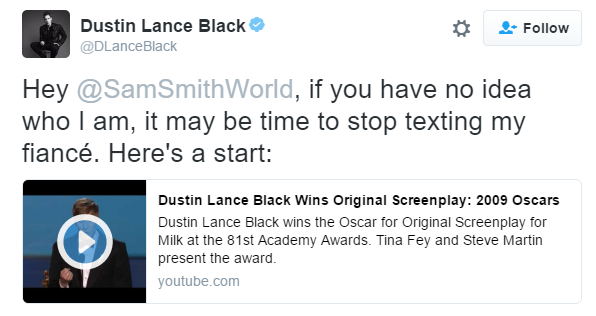