Have you ever played Tic-Tac-Toe on your skin with a tattoo gun? That’s what Kian Lawley and JC Caylen apparently just did.

The pair ended up getting matching Tic-Tac-Toe tattoos, courtesy of Steve-O.

Steve-O and Kian, who have been trying to make a video together, finally got the chance on Sunday. “We’re for this Sunday!” 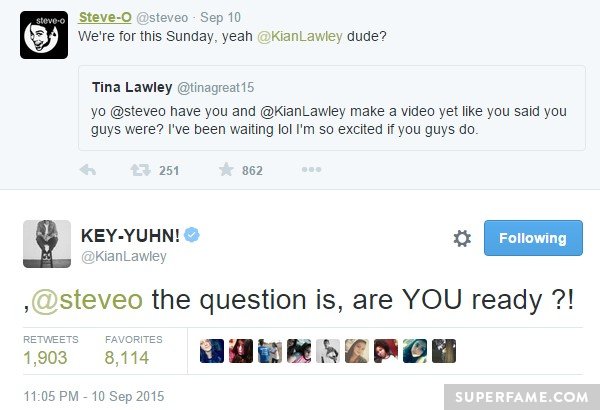 A confident Kian challenged, “Are YOU ready?”

They ended up going to Kat Von D’s tattoo studio with JC Caylen, and played a game of permanent Tic-Tac-Toe.

Steve-O posted snaps and photos from the occasion, and even signed his name on Kian. Here’s Kian giving the thumbs up.

Just a typical Sunday for Kian and JC.

JC Caylen tweeted that he sucked at Tic Tac Toe.

“We filmed it!” Kian tweeted.

JC Caylen posted a photo of the bloody aftermath on Instagram.

Kat Von D flirted back. “Wish I could have been there to hold your hand!”