Stalker Sarah claimed that her friend Nash Grier was escorted out of Kylie Jenner’s 18th birthday party at Bootsy Bellows in West Hollywood – because he wasn’t invited in the first place.

Sarah also posted a corresponding video – but Nash Grier had a different story.

This was also the same party where Tyga gave Kylie a brand new $320,000 Ferrari.

Sarah posted a Vine of Nash getting escorted out of the party, and captioned, “When security escorts Nash out of Kylie’s party 10 minutes after walking in. You must be invited.”

If you can’t spot Nash in her dimly-lit Vine below, look for the guy in a black hat.

She also revealed why she was standing outside in the first place. “I was taking video of her receiving her birthday gift from Tyga.” 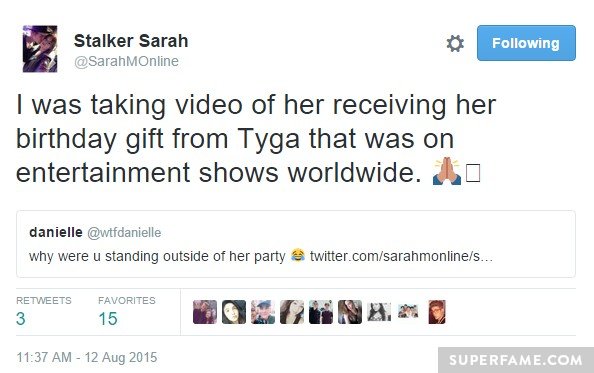 He had a different version of the story, and claimed that he left voluntarily due to his fame – not in “10 minutes because he wasn’t invited”.

“Yo, I was just leaving. People kept coming up to me inside and security escorted me out when I was ready to dip,” Nash said.

Stalker Sarah Laughs It Off

When a fan tweeted her with Nash’s denial, she laughed it off. “Haha.” 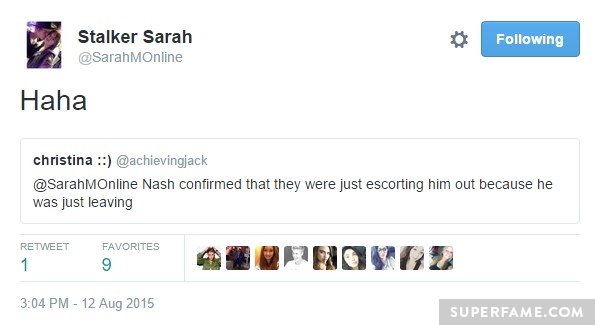 She also defended Nash against some fans that wanted Kylie to attack him.

She reiterated that they are friends, to some disbelieving fans. 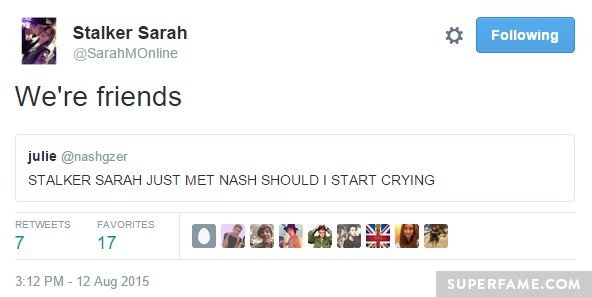