Onision, Lainey and Billie are in a messy breakup triangle. (Photo: Instagram)

Onision broke down in tears as he announced his “breakup” from his YouTuber wife Laineybot.

The bad news didn’t stop there. He also revealed that he gave Lainey full custody of their child.

Onision & His Wife Announce Their Separation

Onision took to YouTube to announce a “separation” from his wife Laineybot. “We are getting separated,” he confirmed.

“Not divorce, necessarily. Just yet,” he continued.

On Twitter, Laineybot also confirmed the separation. “Greg and I… are no longer together!”

Onision also decided to give Lainey exclusive custody of their child – and is set to pay a monthly sum to support Lainey.

Onision Admits He Cheated on Lainey With Another YouTuber

Fans know that Onision and Lainey had a non-traditional marriage. When his wife Lainey came out as bisexual, Onision encouraged her to get a girlfriend – YouTuber Billie Dawn.

In his video, Onision decided to reveal the intimate details of the bisexual love triangle between him, Lainey and Billie Dawn.

Onision revealed that he crossed a line when he gave Lainey’s (now ex) girlfriend Billie a sensual full-body massage that included the fondling of her b****** and buttocks.

Onision said he crossed another line when he told Billie that he loved her.

“I told Lainey what happened, and everything ripped apart,” he said.

He said that Lainey was very upset. “It was about the fact that she CLEARLY indicated that she did not want me cuddling with this person. But I manipulated my way into it, anyway. She saw a huge betrayal.”

Lainey blasted Onision on Twitter. “Everything you said to me was a LIE! I will die from heartache.”

Billie went on Instagram to apologize for her affair with Onision. “I am extremely sorry… I messed up. I betrayed Lainey’s trust.”

She denied claims that she dated Lainey to get to Onision. “I did care a lot about her. I’m NOT some SICK person.”

She admitted that she was no longer in contact with either of them. “Please don’t lash out at me. Bullying is not the answer!”

Lainey Still Wants to Make It Work With Onision

After a while, Lainey announced that she was going to start couples counseling with Onision – in a last-ditch bid to save their marriage. 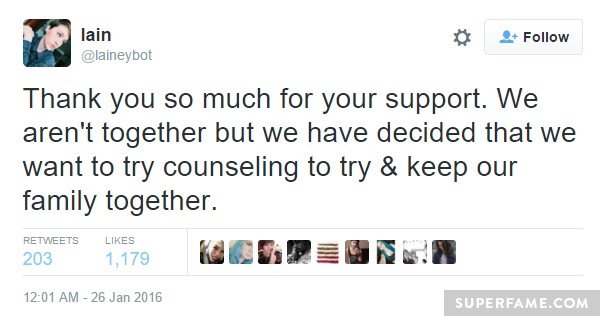