Orley Fenelon made international news with his trolling. (Photo: Twitter)

A 12-year-old Australian Pewdiepie fan has hilariously made international news headlines for something Felix would definitely approve of.

The adorable Orley Fenelon, who says he is also a fan of Markiplier, Dan and Phil, Emma Blackery and Hannah Hart, got worldwide news coverage for this thing he did.

Orley still has a giant Pewdiepie quote up as his Twitter header.

He went on Wikipedia, armed with the usernames “Orleyfpm” and “Orleyforprimeminister2017”, and decided to insert himself into Australian history by making himself the 30th prime minister.

His edit was only caught two days later, when an Australian reporter posted about it on Twitter.

Despite his very short reign at the top, the Bernie Sanders supporter later told reporters that he was hopeful for a better future for Australian politics – which he called “personality driven” and “personal-interest driven”.

He said that he hoped young people would stand up and exercise their political voices, so that Australian politicians and policies would not be soured with old “traditional interests” that are out-of-place in modern society.

He specifically called out the issue of same-sex marriage in Australia. “Most people are like 72% in favor, but the [government] is catering to an older generation.”

His accounts were banned and the edits were revoked.

For some reason, his Wiki edit went international! He was interviewed by a ton of international publications, and even managed to get some TV airtime out of it. 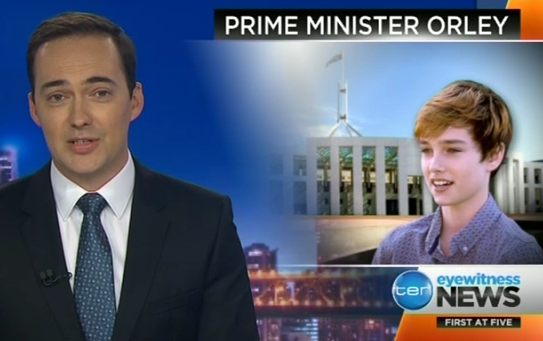 From BBC to outlets in countries we can’t personally pronounce, Orley was there!