Pentatonix will battle with Demi Lovato for the #1. (Photo: Twitter)

Grammy-winning group Pentatonix are currently battling industry veteran Demi Lovato for the #1 spot on Billboard – and the early sales forecasts are already in!

Because we’re in the middle of the tracking week, things can still change rapidly. Go out and get your copies now.

Demi Lovato is just barely edging out Pentatonix as they battle for the top spot.

On the other hand, Billboard is forecasting a tie at roughly 85k (including streaming).

These numbers will change throughout the week.

Remember, the Billboard 200 also includes streaming in its formula, in addition to pure album sales. At the moment, Demi appears to be performing better on streaming sites, which might be enough for her to break the tie. If you already bought an album, you should stream it as well.

Fans are currently out in force in a bid to secure a #1 for their faves. Some Demi fans were even seen bulk-buying on Twitter. They said the albums were going to be given to a children’s hospital.

Unfortunately for them, it appears that they combined the purchases on the receipts – and Nielsen and Billboard discard bulk buys to prevent labels from inflating chart positions.

The two fanbases are still going at it. Some Demi fans were not happy at the thought of a “YouTuber group” topping Demi. “This is disgusting and ridiculous! Who even are they?” 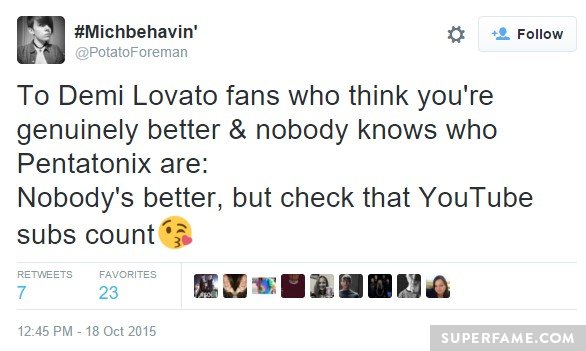 Others thought the fighting was incredibly stupid.

Demi Lovato has been hard at work promoting all year – with award show performances, interviews, revelations and even a “shocking” nude photoshoot.

Just yesterday, she was on Saturday Night Live.

On the other hand, Pentatonix have also been busy doing interviews, and dropped a music video.

They were also recently on Jimmy Fallon.

No word yet on a nude photoshoot. Both Demi and Pentatonix will be very busy throughout the week, so stay tuned.