For some reason, Pewdiepie was wandering around the Pewdiepie subreddit and stumbled upon a critical post made by a fan, and decided to reply.

“I miss the old Pewdiepie,” the fan writes. The fan then continues to write up a 2000-word essay detailing all the things he dislikes about the “new Pewdiepie”.

Redditor Calls out Pewdiepie for Selling out, Being Childish & Snubbing Fans

The fan also expresses disappointment with Pewdiepie’s increasing distance from fans. “Now he seems to be just pandering,” they write. “Seems less like a friend and more like some guy thousands of miles away.”

The fan also accuses Pewdiepie of recycling jokes and trying too hard to be funny. “He is beating a dead horse.”

Pewdiepie’s “childishness” is also criticized. “Now he is immature in a stupid way.”

Lastly, the fan accuses Pewdiepie of being a sellout. “He is selling out. He has gone against his philosophy.”

Before Pewdiepie commented and linked his fans to the post, the post had over 90% upvotes with around 90 points. The majority of commenters, like the one below, agreed with the original poster.

Pewdiepie Decides to Defend Himself, Calls the Fan a ‘Unfair’ Nagger

“This is a very nagging way to do it. It’s just unfair,” Felix writes. “Feel free to not watch my videos. I think my content has improved drastically.”

Pewds tries to reason with the fan, and confirms that he is, in fact, a human – and that humans change.

“I’m a person. You’re basically telling me to act the same for 5 years. Because you liked it better.”

“You call me a sellout, but give no good reason why. You don’t explain.”

He disagrees with the fan that he’s more childish now. “Watch my older videos…they are waaaaaay more kid oriented.”

However, Pewdiepie does agree that he has reduced his connection with fans. “This may be true, but I never once stopped trying to. I can’t please everyone.”

He then calls the accusations “senseless and annoying” in a tweet. 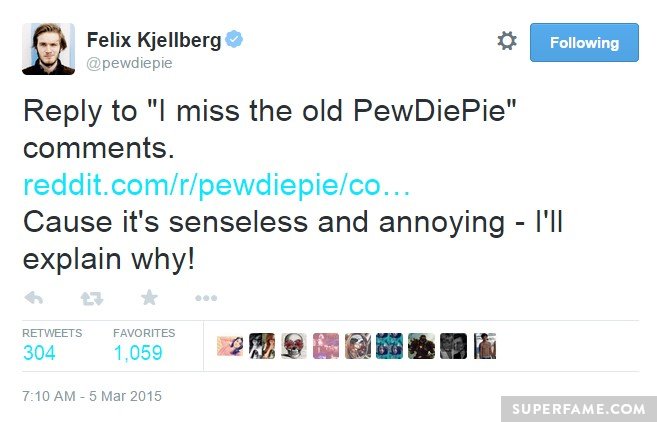 Do you agree with Pewdiepie or the fan?