Are fans REALLY burning themselves for Pewdiepie?

No, Pewdiepie is NOT on hard drugs. But some people were trying to trick people into thinking he was arrested for meth.

There’s more! People were also trying to trick his fans into burning their skin with fire in solidarity.

Here’s how the whole fuckery started in the first place.

Some floated around the classic death hoax as a suggestion. “Pewdiepie is dead?”

Others went dark. “Pewdiepie’s brother is apparently an animal torturer and has been caught by the authorities where he lives?”

However, one suggestion was loved by all. “Pewdiepie has been arrested for doing drugs! Let’s use this to start something similar to #cuttingforbieber!”

They eventually settled on the hashtag #Burn4Pewds. “Let’s show Pewdiepie that his actions burn inside AND out… and attach a person with a cigarette burn.”

The hashtag was filled with gory photos of burnt skin.

“Post a picture of you burning a part of your body on social media!” a 4channer urged Pewdiepie fans. 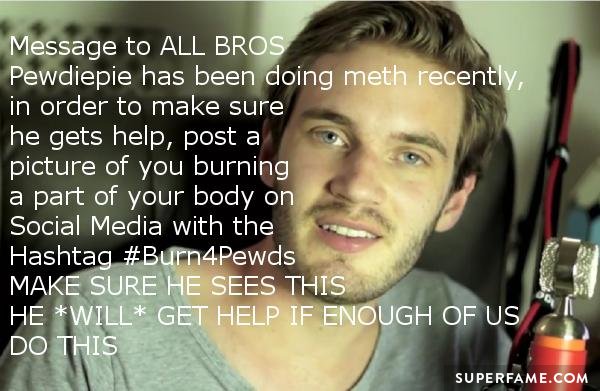 “I must atone for his sins,” another 4chan user tweeted.

Many defended Felix against the fake claims.

Fake articles were even created. 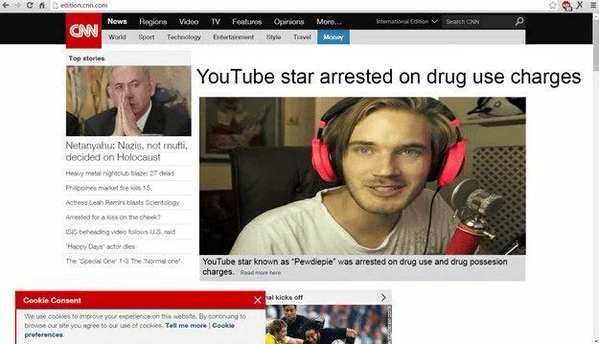 Others were so lost. “What the HELL is this?”