Ricky Dillon is not taking the Auto-Tune accusations lying down. (Photo: Instagram)

Earlier this week, Ricky Dillon went on the defensive regarding criticism of his music and singing abilities.

For some reason, Ricky went trawling around his older music videos, and decided to defend himself against comments that are over two months old.

Ricky, who gets regular flack from his own fanbase regarding his singing, expressed exasperation at the relentless “Auto-Tune” accusations – and defended himself against a fan who said he was making music seem like a joke.

Despite having released “Live It Up” back in February, Ricky revived an old comment thread on the video, with a brand new rant.

Back in February, a fan started it all by simply commenting, “This autotune.”

Two months ago, Ricky replied, and said, “We didn’t use any Auto-Tune on this song. Wasn’t needed. The vocals are super simple.”

Many fans still didn’t take his response seriously, and told him there was clearly pitch correction involved.

Flash forward to one month ago. Ricky decides to defend himself again – by admitting there were “effects” used. “Obviously there’s effects like on the rappy part, just to enhance the song.”

He bragged that the vocals in the song “weren’t challenging in any way” for him, so he did not need to use Auto-Tune at all.

Flash forward to earlier this week – when Ricky decided to defend himself again on the exact same comment thread.

Ricky finally admitted that he did use pitch correction – but not Auto-Tune. He then argues about the semantics.

“People don’t know the difference between Auto-Tune and manual pitch correction. There is literally no Auto-Tune at all used in this song. Yes, my pitch is nudged here and there to make the notes exactly on key. I’m just getting kind of tired of the same comments.” 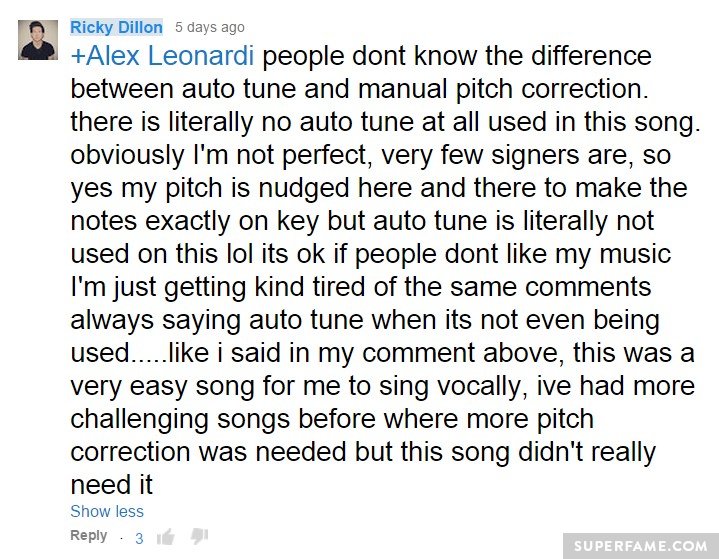 This might be true, as Auto-Tune is a branded, proprietary audio processor by Antares Audio Technologies.

Many similar technologies by other companies exist – which also do pitch correction under different brand names.

“This was a very easy song for me to sing vocally,” he continued.

Ricky Defends Himself After Being Accused of Not Taking Music Seriously

It looks like Ricky was in a defensive mood earlier this week, because he decided to reply to another angry fan on a different old video.

A fan angrily commented, “This is the complete package of awful singers making music seem like a joke – FUCK YOU!”

This was the music video that got the fan all riled up.

“This is such an ignorant comment,” Ricky replied. “Making music seem like a joke? It’s okay if you don’t like me – but I’m beyond passionate about making music. This is not a joke to me.”

Most of the fan abuse appears to stem from Ricky’s live singing abilities.

For example, 10 months ago, he performed “Ordinary” live at DigiFest – in a video that ended up with a barrage of dislikes.

As a comparison, this is the original music video.

A few weeks ago on April 9th, he performed “Ordinary” again at Amplify Live, Brisbane. Do you think Ricky has improved since last year?