Shane Dawson is not a stranger to racial controversy. He’s so infamous for them, that he once posted an apology video on YouTube, expressing regret regarding his past actions.

However, Shane recently got into trouble again, when he decided to tweet various messages expressing his viewpoints on ABC’s racial diversity, and their title choices.

Shane Talks about ABC’s Black-ish & Fresh off the Boat

He then tacks on a racial slur typically used to describe people of Mexican descent.

From this tweet, most fans assumed he was critical of the stereotypical, borderline offensive titles used by ABC – despite the fact that the titles were chosen by the creators of the show. Creators Eddie Huang and Kenya Barris have previously explained the rationale for their respective show titles.

He finds ABC’s strategy to diversify their programming “too obvious” in their “let’s get all the races” master plan – in another tweet.

This tweet stirred up ambiguity on Shane’s actual position on ABC’s diversity.

One of the people that wasn’t happy with Shane was Franchesca Ramsey, who re-blogged a post criticizing him on Tumblr.

The post expressed outrage that Shane would complain about television diversity. 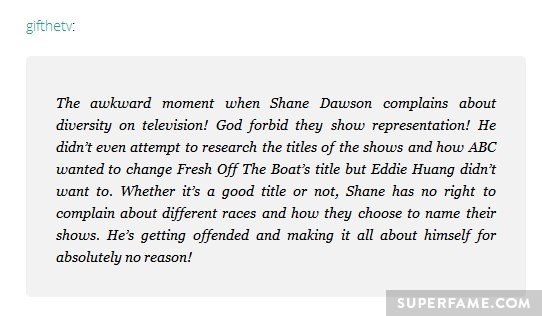 However, many fans still stuck up for Shane, and told him not to delete his tweets due to “freedom of speech”.

Shane then deletes his tweets, and expresses annoyance that he was “not understood” and “scrutinized”.

“I just wish there were shows about all races,” he said.

Is Shane just misunderstood – or sinister? Comment and tell us.