Shane Dawson recently popped onto Snapchat to clear up some big rumors.

He discussed everything from Gurugossiper to Trevor Moran.

Shane revealed that he stumbled upon the Gurugossiper forum. “I clicked on a link, and I ended up on a website. I am not going to say the name of it, but y’all know who I am talking about.”

“It is a site I never go to. Ever. Because, one of my friends, one of my YouTube friends, goes to it sometimes – and she tells me stuff. Why are you reading that s***?”

“I avoid stuff like that. But I fell down a hole, girl, and I learned some s***. So I just want to debunk some rumors that I found.”

Shane Hits Back at Body Critics

“And then this one girl goes, he needs to stop trying to lose weight and just gain muscle instead, because that will make his body less weird. Dot dot dot. Never mind, no it won’t.”

Shane Denies That He Is Secretly in His Late 30’s

“Speaking of gossip, I just want to let all the gurus out there know, not that they are watching this. Because this face would give them a heart attack.”

Why were fans thinking this? Shane and Trevor often hang out, and Shane constantly references Trevor. He even went as Trevor for Halloween.

On Trisha’s podcast, Shane said, “I want to plug Trevor Moran’s a****** with my c***.” Shane also constantly makes sex jokes about the 17-year-old. Here he is, talking about facials on Twitter. 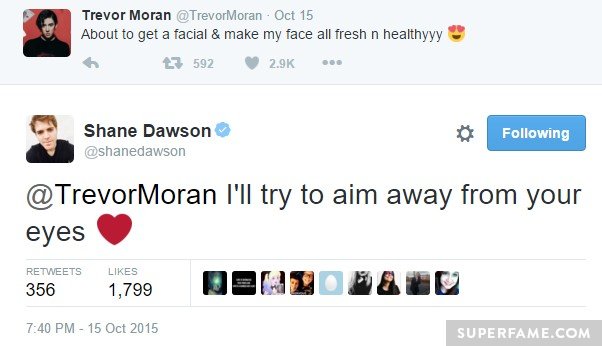 “By the ages of my previous girlfriends, and my daddy issues, wouldn’t you suspect that I would be into OLDER types?”