Some YouTubers are under attack after joining the Band Aid 30 charity single with no apparent musical talent or credentials.

Band Aid 30 was a project spearheaded by Bob Geldof and Midge Ure that brought together the UK’s musical mega-stars for a Christmas charity-single remake of Do They Know It’s Christmas – with the music video premiering on The X Factor UK.

How Did Haters React?

A lot of people were not happy with their inclusion, and bombarded the trio with angry messages.

However, the trio did have some supporters.

Zoella Responds to the Hate

Things got so heated that Zoella took to Twitter to respond. 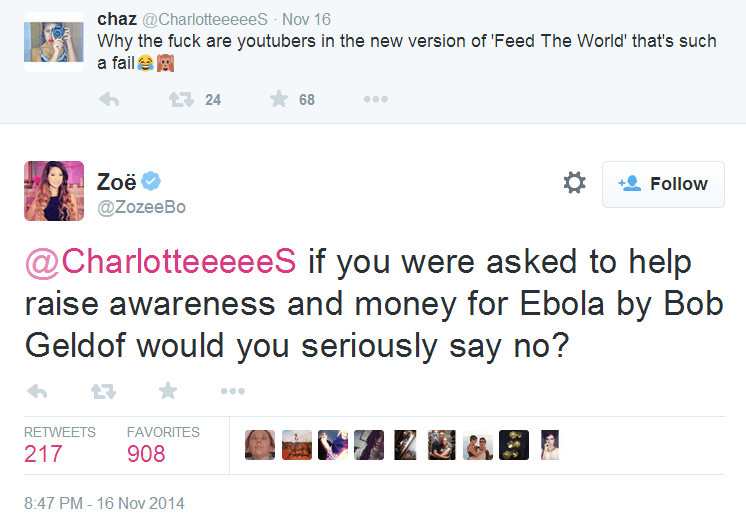 Fellow YouTuber Louise Pentland (known as Sprinkle of Glitter) spoke out against critics of her friends. On the red carpet for the Frozen Sing-A-Long, she told Yahoo, “Are you buying the single in order to aid people who require help, are you just buying for the song and music?”

“You should not criticize people who are not professionals. Everyone enjoys singing. They are doing it for a good cause – it’s a nice thing.”

“I think it is very exciting for them and cool. I spoke to Zoella about it, and she said that the experience was very nice, and it was cool to do something for charity.”

What Are the Other Controversies?

Band Aid 30 has already been marred with controversy – from people criticizing the demeaning nature of the song, the White Savior complex, the lyrical inaccuracies, and the dodgy history of the The Band Aid Trust. Adele was even viciously attacked by Bob Geldof for allegedly turning him down.

Rapper Fuse ODG also turned down inclusion when he saw the demeaning, negative nature of the lyrics about Africa, which he details in an editorial in The Guardian.

Lyrics include references that mention “no peace or joy in Africa”, “death in every tear”, “kisses of love that kill you”, “a world of dread and fear” – along with lyrics that describe how Christmas bells are harbingers of death in Africa. Critics have called out the new, re-written lyrics as factually inaccurate, perpetuating negative stereotypes about Africa.

Critics have also called it out for perpetuating the White Savior complex, with primarily white, First World celebrities patting themselves on the back for contributing very little. They claim it ignores the great and heroic efforts African organizations and locals have done to combat Ebola within their borders.

Another criticism is that nobody is able to confirm exactly where the money is going to.

The Washington Post investigated this, and found that there were no specifics available, and that the terms and conditions were intentionally ambiguous.

The Band Aid Trust also has a nasty and turbulent history of unreliability, with many alleging that past Band Aid and Live Aid funds have actually contributed to more civil unrest in Africa – with funds used to purchase firearms.