Taylor Swift found herself embroiled in controversy when she decided to re-tweet and compliment Nash Grier – the Viner famous for making controversial and scathing homophobic remarks.

Her Swifties were angry that she would pay attention to, and validate the Vine star.

It all began rather innocuously. Nash Grier, for whatever reason, decided to announce to his followers that Taylor Swift “is so talented”.

Nash Has Not Always Been so Nice to Taylor Swift

A lot of his fans were a little confused, considering Nash has not been very complimentary to Taylor in the past. He once told Taylor to “close her mouth” and take “chill out medicine” because “she needs help” – a tweet that has now suspiciously been deleted.

He has also expressed a desire to break her heart for a number one hit. 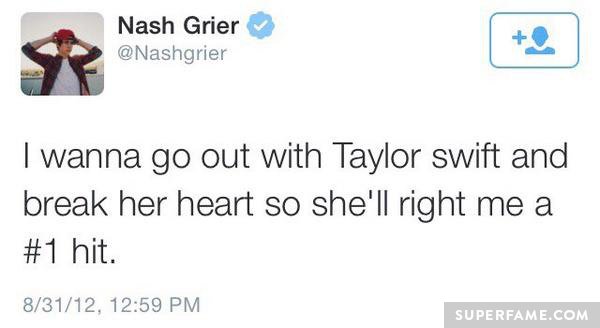 Taylor, or whoever manages her social media accounts, caught wind that a social media influencer had paid her a compliment. Normally, the best thing to do in such a situation would be to engage with the influencer.

She not only retweets his message, but calls him “very sweet” with “next level” Vines like the one with the “rabbit in the purse”.

Taylor is referring to this particular Vine, where Nash dresses up in a blonde wig and pretends to be a woman taking out items of of a purse – resulting in a bunny coming out.

Taylor’s Swifties were baffled by the fact that she would pay a compliment to a controversial Vine star known for his homophobic and sexist outbursts, and told her to delete her tweets. 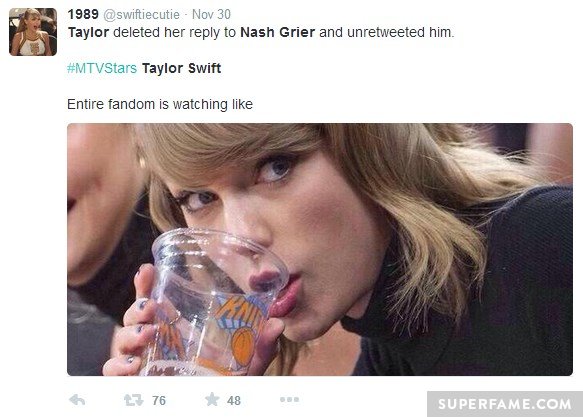 The tweets were quickly deleted.