The Janoskians have stirred up some negative media attention after posting a 5-second video of a car crash on Facebook.

The Janoskians (Which is short for “Just Another Name Of Silly Kids In Another Nation”) are made up of Daniel Sahyounie, Beau Brooks, Luke Brooks and Jai Brooks.

The Los Angeles-based Australian pranksters often like to stir up trouble with controversial videos and shocking stunts.

However, they might have been quite surprised that one of their Facebook posts is (unintentionally) getting negative attention. Fans are criticizing them for “not stopping”, and for just driving past.

The Janoskians Post a Video of a Crash Scene

The boys decided to go on Facebook and post a very short video of an accident scene. “Holy s**t,” one guy can be heard saying. 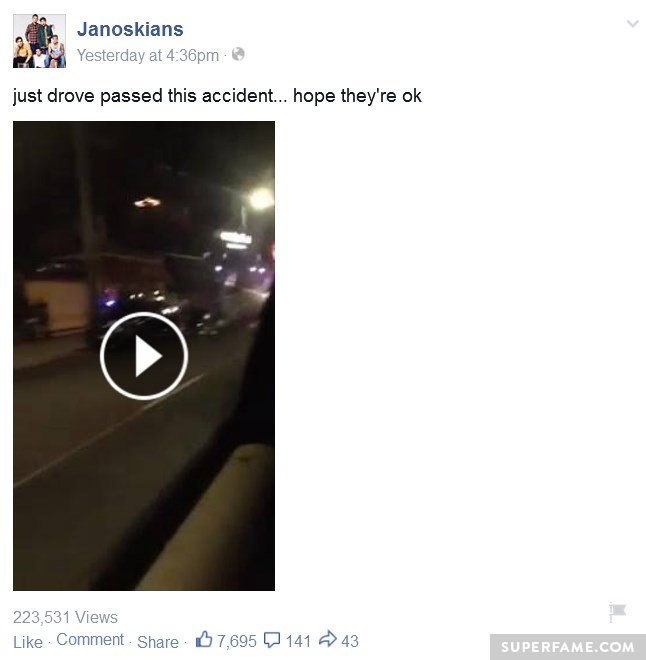 Fans & the Media React to the Video

The Daily Mail, 9 News, and News.com.au all posted articles about the incident.

Some fans weren’t happy with their video. Many questioned them, asking why they did not stop – and why they decided to post it on Facebook for Likes.

However, not everyone was so scandalized. “How many of you would have done it in the first place?” one fan said. “Like STFU.”

The Janoskians Respond to the Controversy

The Janoskians were shocked that their video was received negatively. “WTF, there were at least 5 police there and a s**t load of traffic! What good would me getting out of the car be? And there was NO ONE in the car!”

Do you agree with their position? Or is it still in bad taste?