Shane Dawson and Trisha Paytas are not a fan of 11-year-old Oscar nominee Quvenzhané Wallis, who plays Annie in the critically panned film that was leaked in the Sony hacks.

“Cameron Diaz is the worst actress in the world,” Shane says. “The girl that played Annie was not good.”

“Oh my god, this is why I got in trouble on Twitter! I was watching the Macy’s Thanksgiving Day Parade and she was performing, and she was performing It’s a Hard Knock Life with all the little orphan girls. She literally looks like she didn’t even want to be there. She was like over it,” Trisha interjects.

Shanie continues, “Jamie Foxx is so good. He brings it, b*tch. But it cuts to Annie, and she has no emotion! I’m like, what the f*ck.”

“Everything in the movie was amazing except for Annie and Cameron Diaz, and I was so angry about it,” Shane says.

“That’s all I have been talking about on Twitter and everyone saying that I’m racist,” Trisha says.

“I was like, not at all, she’s just TERRIBLE,” Trisha continues. “I tweeted a link to SNL’s parody of Annie and I got called racist.”

“F*ck you! Not EVERYTHING is meant to be a political statement,” Shane says to the camera. “When I say I didn’t like the girl from Annie, it doesn’t mean I hate ALL black little girls.”

Fans React in the Comments

Some fans mentioned “white supremacy” while explaining why the phrase “Black Annie” is problematic, while others were just angry.

Others thought that Quvenzhané should be immune to all criticism due to her skin color. 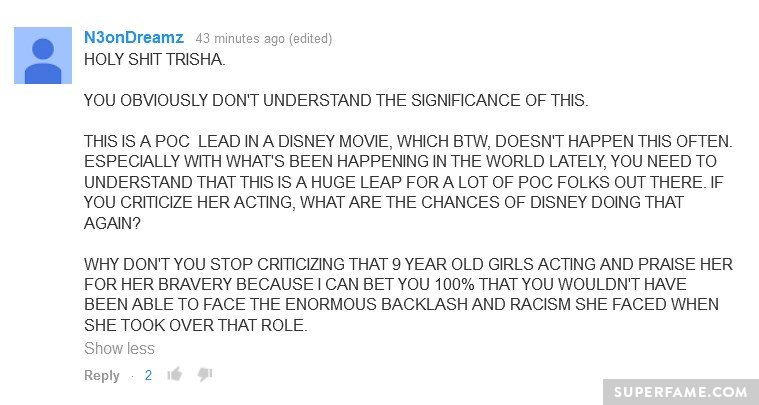 Other comments went for the “reverse racism” angle.

Do you think saying the phrase “Black Annie” is racist? Comment below!