Trisha Paytas has started a war with Joey Graceffa - will he bite? (Photo: YouTube)

In her latest video, Trisha Paytas has started a feud with none other than Joey Graceffa – one of her bestie Shane Dawson’s closest friends.

In her video, Trisha discusses the YouTubers she would and wouldn’t bang on YouTube. When she comes to Joey Graceffa’s name, Trisha can hardly hide her disgust.

Trisha tells viewers, “I would have banged him. But he left a nasty comment on one of his videos once. I didn’t see it. He deleted it. Something like ‘Hell no!’ or something.”

The nasty comment Trisha is referring to, is when Joey responded “no” to a fan question about collaborating with her.

She continues, “But um. Joey Graceffa, would I bang? Hell no!”

She doesn’t stop there, as she then takes aim at his ambiguous sexual orientation.

She says with a wry smile, “I don’t know his sexual orientation, but I’m PRETTY SURE he wouldn’t want to bang me.”

Later in the video, she fears backlash from Joey Graceffa fans and tries to appease them.

She says, “I feel like the Joey fans are going to come hate me. No shade on Joey. Joey, you’ve got your own little army, and you are the captain of that army – so I salute you, Joey. I know 20 million girls think Joey Graceffa is hot.”

However, we clearly saw this feud coming, as Trisha has been throwing daggers at Joey for quite a while.

In late August, Trisha called out a male YouTuber for telling his audience to pay for content that already existed for free on his YouTube channel. 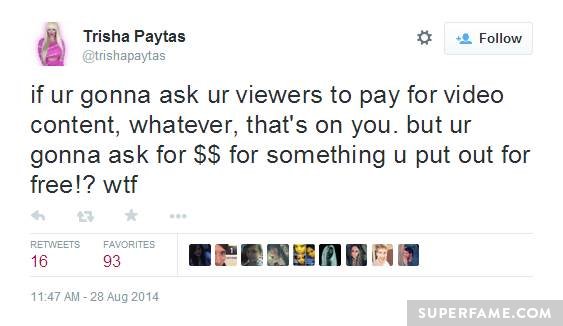 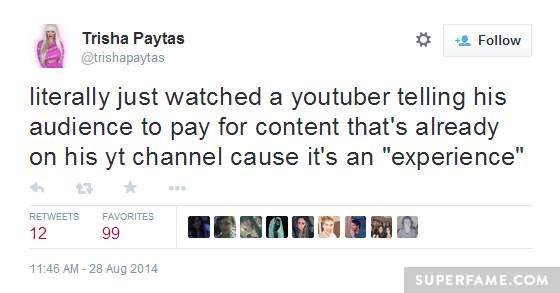 Who could this be? That’s right – Joey Graceffa.

The day before her outburst on Twitter, Joey posted this video imploring people to pay $4.99 for Storytellers – which already exists on his channel for free. He describes it as an “experience”.

Many of Trisha’s fans warned her of the incoming “Psychopaths” – the fanbase name for Joey Graceffa.

Some of Joey’s fans descended, and called for murder.

Another fan also mentioned that Trisha has been actively dissing Joey on Twitter – and that he’s never responded.

Are you Team Trisha, Team Joey, or Team Nobody?