The Huffington Post has decided to cause trouble by inviting several Viners and YouTubers to sit at their table during the 2015 White House Correspondents’ Dinner – including formerly bitter rivals Tyler Oakley and Nash Grier.

Although the duo act friendly on social media – it’s hard to be too friendly when you almost ended somebody’s career.

According to The Washington Post, The Huffington Post has invited a slew of internet celebrities to the 2015 White House Correspondents’ Dinner – where they might be sitting at the same table.

Tyler Oakley is invited, along with Nash Grier. Tyler partially confirmed his attendance on Twitter, but Nash has not spoken out, as of writing.

Tyler Oakley was instrumental in bringing awareness to the following potentially career-destroying video, where Nash Grier shouts a homophobic slur during a HIV PSA.

Tyler made sure to tweet the controversial Vine to his followers, multiple times.

After the accusations caught fire on social media, they were then reported by a horde of media outlets worldwide.

Eventually, it all ended in a civil parting-of-ways, when Nash Grier publicly apologized – and Tyler accepted it. 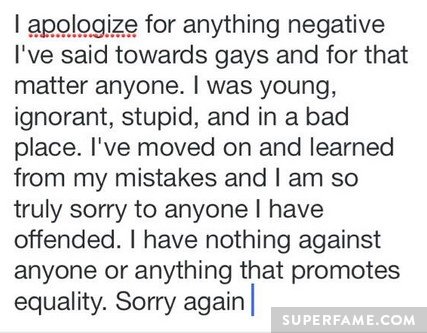 Tyler Oakley has also had prior e-fights with some other popular Viners over LGBT-related topics – including Cameron Dallas and Taylor Caniff.