Christian Collins has been thinking about getting a lip piercing for years, but this time – it has finally happened. But fans are split.

Christian Finally Gets His Wish

He invited fans to watch his piercing on Snapchat.

“So, I’m about to get my lip pierced. I’ll be snapchatting if you wanna watch.” 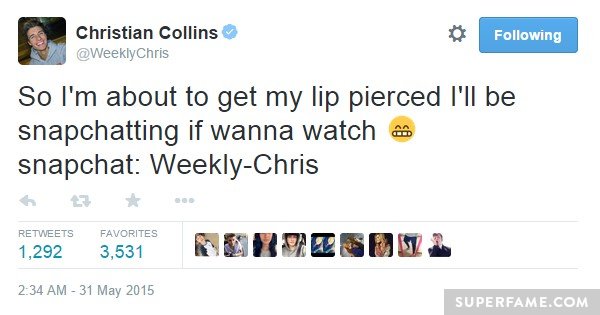 Watch a needle plunge into WeeklyChris’ lips. Look away if you’re squeamish.

“Really happy with it, I’ll post a photo tomorrow,” he tweeted.

Like with many piercing and tattoo announcements, fans are very divided.

Many fans were panicking, pleading Chris to stop. But of course, it was too late.

Others urged him on.