Miranda’s baes already include JoshuaDTV, Connor Franta, Joey Graceffa, Ricky Dillon, Tyler Oakley, Alfie Deyes and more. However, she has added yet another bae to her already long list of sexual conquests.

As Miranda often says, “Cheerio mateys.” Miranda’s new bae is from the United Kingdom, and is also gay – but judging by her list of baes, she doesn’t seem to mind.

It started just hours after Miranda’s Comedians in Cars Getting Coffee episode with Jerry Seinfeld was released. Tom Daley tweeted that he was in love with the worldwide megastar. 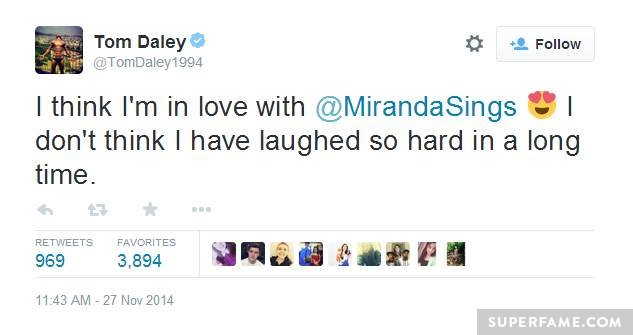 Miranda, not one to miss an opportunity, asked Tom to be her new bae. 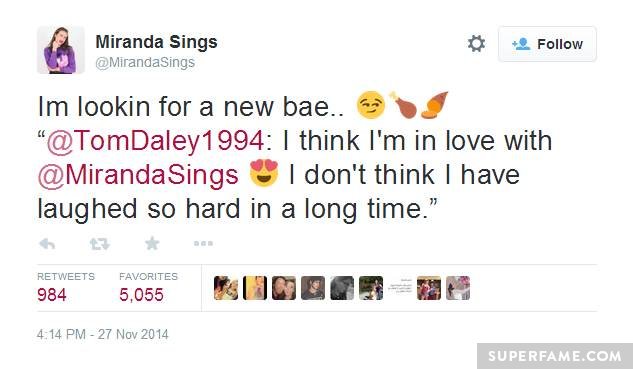 Tom tweets a series of emojis in reply.

Tom then offers to teach Miranda how to dive!

Miranda Sings and Tom Daley set up a date. Will we be seeing a video soon? 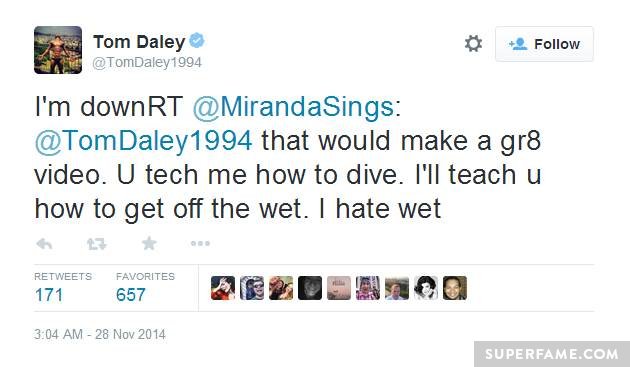 It comes as no surprise that gay icon Tom Daley would be attracted to gay icon Miranda Sings.

Like Tom, who fights for gay equality, Miranda too also fights for the equality to marry her gay boyfriends.

We’re not sure how it’s going to work out, as Miranda is likely to be furious over Tom’s diving outfits and penchant for stripping off whenever he can.

Joey Graceffa will surely be furious at this hot new competition for Miranda’s affections – as he recently proposed to Miranda, and they are set to be married very soon.

Likewise, Tom’s beau Dustin Lance Black is not going to be happy about this three-way.

Which of Miranda’s baes is your favorite? Or are you a buzzkill that believes polygamy should be outlawed? Comment below!