Despite her many haters, Zoella has scored a victory for #TeamInternet by smashing the first week sales record for a debut author in the United Kingdom.

In the first week alone, 24-year-old Zoe Sugg has sold exactly 78,109 copies of her hit novel Girl Online according to The Telegraph.

Additionally, she catapulted to number three on Amazon’s Bestsellers based on the strength of pre-orders alone – another record for the books.

Sugg responded to this, saying how grateful she was to everybody who bought a copy of Girl Online. 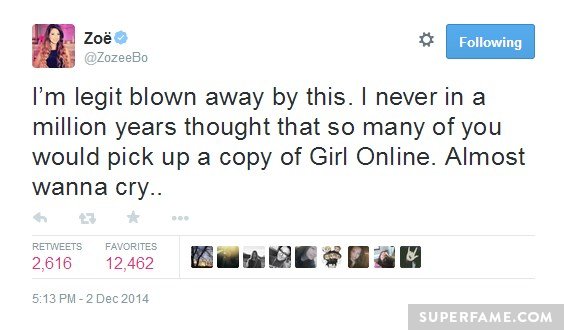 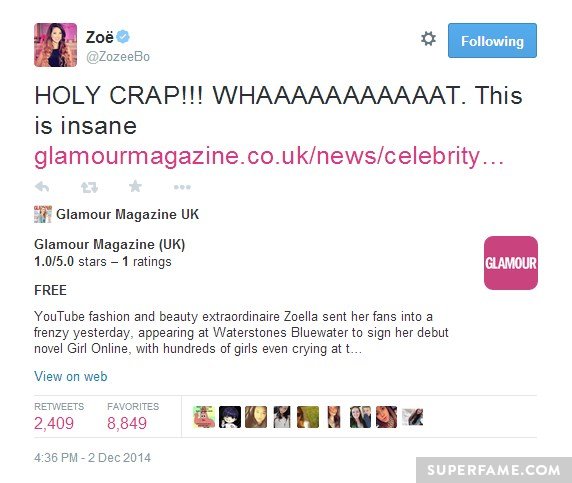 Harry Potter and the Philosopher’s Stone, JK Rowling’s debut novel, only had 1,000 copies printed for the initial run. Dan Brown’s debut The Da Vinci Code sold a mere 98 copies. Even Stephanie Meyer’s Twilight bombed out with 53 sales. EL James’ Fifty Shades of Grey sold 14,814 copies in its first week – but later went to break the record for the highest selling debut book in history.

This is clearly not the end for Zoella, as she already has a two-book deal with Penguin Random House.

CEO Tom Weldon, who was originally skeptical of signing on a YouTuber, decided to listen to his pre-teen daughter when she told him it would be a hit.

This clearly means stodgy old white men need to listen to their teen daughters more – like Jerry Seinfeld did for Miranda Sings.

This news has already brought out the haters, with many slamming the book as “ghostwritten”.

Are you happy for Zoe’s success? Or are you furious? Comment below!