Carter Reynolds, who threatened ex-girlfriend Maggie Lindemann earlier today by releasing intimate details of her sex life as revenge, has announced that he is contemplating suicide (he’s fine).

In unrelated news, Maggie also revealed that she has been hospitalized.

Carter, who is angry at Maggie for not reciprocating his recent advances, took revenge on a YouNow live stream. Hayes Grier trended worldwide because of this. Maggie also threatened to call the cops during his live stream, while she was in the hospital.

The live stream abruptly ended when Carter got a chilling phone call.

If you haven’t already, click here to catch up on why this is all happening in the first place.

Maggie Lindemann Announces That She’s in the Hospital, Carter Visits Her

Maggie announced that she was actually in the hospital during Carter’s angry live YouNow stream. She did not disclose a reason, and tweeted that she “wanted to go home already”.

According to Carter, he insinuated that he ended the stream in order to immediately visit her in the hospital. He claimed they were “okay” now.

Things quickly turned sour. “Maggie is saying I’m the reason why she is in the hospital…fuck you!”

Carter Reynolds Announces His Intentions To “Kill Himself” on Twitter Because of Haters: “I Don’t Want to Live Anymore”

After Carter’s attempt at shaming Maggie backfired, he went on a chilling rant.

“I have reached my breaking point. I do not even want to live anymore. I never had thoughts of killing myself until now. And no, it is not because of Maggie. I am done with all the hate and b*******,” he tweeted. 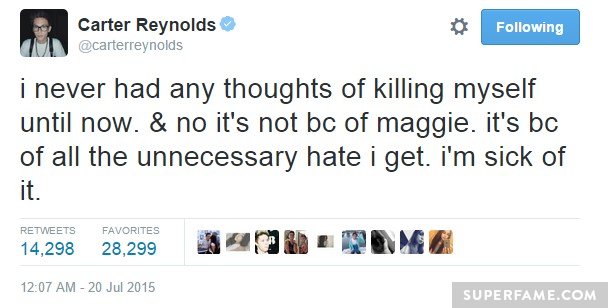 She insinuated that she was in the hospital, possibly due to a suicide-related overdose. “Yes I did OD,” she confirmed.

She revealed that she has struggled with suicide her entire life.

Maggie saw some fan rumors claiming that Carter Reynolds somehow saved her life, and she was furious.

She revealed that Carter refused to help her call the police because he didn’t want their current situation to get out, or to be questioned. 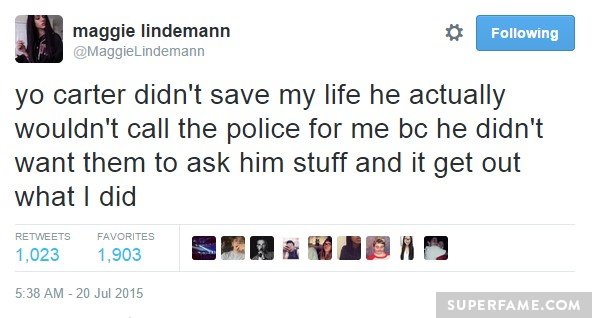 Taylor Caniff begged Carter to stop. “Do not say that s***, dude.” He warned him that impressionable fans might get the wrong idea.

The story is still developing.

Do You Struggle with Feelings of Suicide?

Please know that there is always someone you can talk to.

Simply Google “suicide help“, and Google will automatically suggest a helpline in your geographical location.