A recent episode of My Drunk Kitchen with guest star Sarah Silverman has come under fire for promoting cannabis (despite getting stoned being perfectly legal in California).

Strawburry17 has also recently been told off for encouraging her young viewers to smoke.

Sarah and Hannah can be seen smoking and sharing a blunt, as they make an aptly-named Veggie Pot Pie.

In the description box, Hannah acknowledges the potentially controversial nature of the video, as marijuana is still illegal in many places in the United States and the world.

She encourages viewers to ask questions and submit their opinions on legalization, and warns them to “use in moderation”.

“How can people think alcohol is better than weed?” Hannah wonders. “The worst thing that’s happened on a Sunday when I’m smoking – is that I listen to too much Jazz.”

Fans React to the Video

Many fans were supportive of her choice to promote pot-smoking. 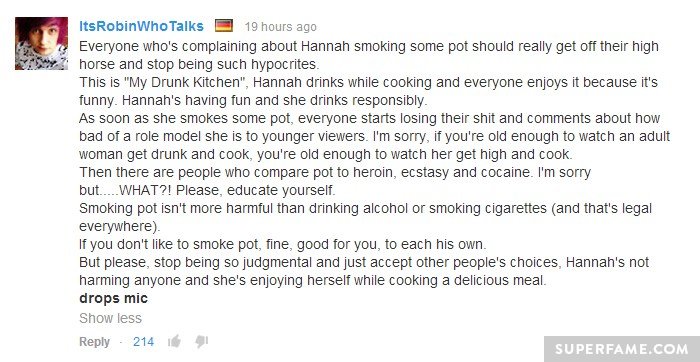 Others weren’t a fan of Sarah Silverman.

Others mentioned that unlike alcohol, marijuana is largely illegal.

Another fan critcized marijuana as a gateway drug.

Others didn’t think My Drunk Kitchen is funny and urged her to stop it.

Other weed-loving YouTubers like Tyler Oakley and Lisa Schwartz came out to support Hannah’s love of ganja in the comments.