Alfie Deyes is known for having a big head, literally. But has his new-found fame gone to his metaphorical noggin?

The comments section of Alfie Deyes’ latest vlog is a super-dramatic bloodbath of negative comments, something Alfie’s not going to like.

Fans are furious at Alfie Deyes for “forcing” viewers to buy multiple copies of his book, being late to meetings, thinking The Hunger Games needs his personal promotion, and being rude to a woman at BBC Radio One.

Whew – and all in a mere ten-minute vlog!

To kick things off, Alfie reveals that he is late to an important business meeting. “First meeting of the day started 11 minutes ago, that’s a great start, isn’t it,” he says while calmly sauntering through the train station.

While many fans find his lateness endearing, the top-voted comments are a little more critical.

Secondly, fans are upset that they have to purchase another book if they want to meet Alfie at a book signing – even if they already have a copy.

He says, “The Pointless Book book tour is happening, and I have another two dates that I am officially announcing – Birmingham this Friday, Manchester on Sunday. Because it is a book signing, you have to purchase a book to meet me. I think there are a few hundred or thousand spots. Buy the book with the link in the description, and you have a chance to meet me.”

He blames this on too many fans showing up to a previous signing.

“It has to be a ticketed event, because of what happened in London when over 8,000 of you turned up. It was crazy. We don’t want that to happen again. So you have to buy a book from the link down below – and it counts as a ticket,” he continues.

This revelation infuriated his dedicated fans, who already have copies.

However, some others defended Alfie. 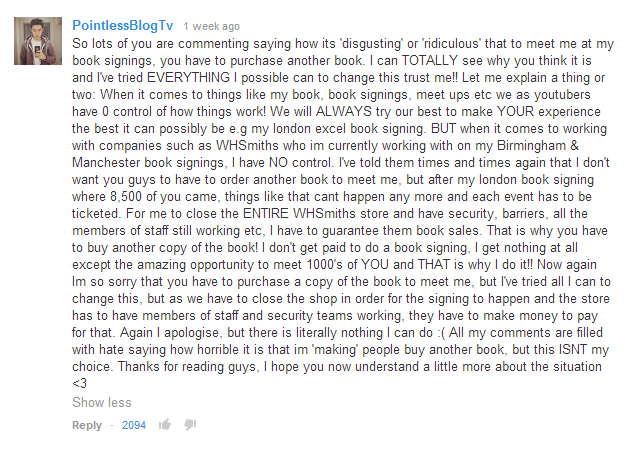 Fans Accuse Alfie of Being “Rude” at BBC Radio One

Alfie then goes to BBC Radio One to record a show. When a woman is trying to explain the technical elements of the system to him, Alfie ignores her. He touches random buttons on the screen, points the camera away, and talks over her.

Many top comments are complaining about this, too.

Fans Complain That Alfie Complained at The Hunger Games Premiere

Finally, Alfie attends a The Hunger Games: Mockingjay – Part 1 premiere, where he complains multiple times that his phone and camera were taken off him.

He says, “The annoying thing, guys, is that when we got there… I’ve never ever had this before at a premiere. They made us put our phones, our cameras and everything inside little pouches and then they took them away from us before the red carpet.”

“I was like, surely you want me to promote this by putting it in my vlog so that people get to see what the film’s like? It blew my mind. I couldn’t take any pictures with Jennifer Lawrence, which was annoying.”

Some viewers were so incensed by the ten-minute vlog, that they dramatically vowed to never watch his videos ever again.

Others pleaded commenters to calm down, in case he quits vlogging like girlfriend Zoella.