James Charles was attacked by haters after he said It sucked. (Photo: Instagram)

James Charles had strong opinions about the new It movie after watching it in the cinema with Loren Gray.

Spoiler alert! He absolutely hated it, and said that the movie was “awful” at just five minutes in.

Stranger Things and It star Finn Wolfhard saw his tweets, and fired off a reply.

For months, James Charles has been widely ridiculed with a selection of mean memes about his appearance.

Most of the memes sprouted up when he took his famous “Casper the ghost” meet-and-greet photo.

Could these memes have impacted his opinion of the movie?

James Charles Despised ‘It’, Lets His Opinion Out

After watching the movie, James was seen in Loren Gray’s Snapchat getting very heated about the movie. Clad in a bright yellow hoodie, resembling a character from the movie, he appeared very upset at how “bad” it was. Video below!

“Listen, I am a fan of horror movies,” he said. This is definitely true! Take a look at James’ Tinder profile.

During the movie, he even live-tweeted his distaste for it. “The movie is so predictable!” 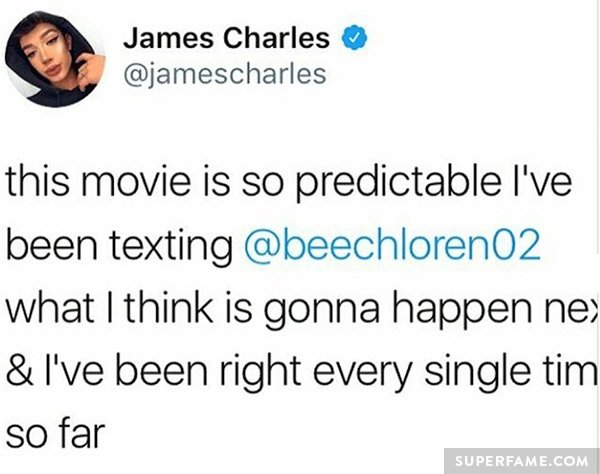 “It is already awful five minutes in,” he dragged.

He quickly deleted his tweets.

Stranger Things & It Star Finn Wolfhard Fires Back at James

James’ tweet about the “awful movie” was spotted by ‘It’ actor Finn Wolfhard.

He fired back by asking James why he was using his phone to text in the cinema in the first place. “Rule 1,” he said. “Why are you on the phone in the movie theater?”

James Defends Himself After He’s Attacked by Stans

Stans of Netflix’s Stranger Things then launched an attack on James, followed by other fans.

Stranger Things fan accounts circulated his tweets to mock James. Apparently, his opinion was a “wrong opinion”. James was very confused why he was being attacked. “You all need something better to do with your lives.” 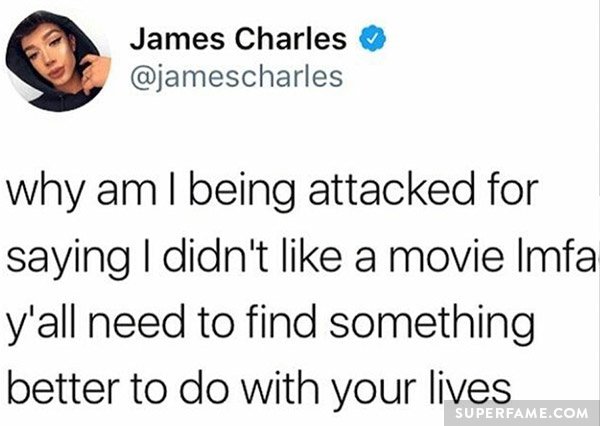 The same thing happened to singer Zara Larsson when she dared to criticize Netflix’s 13 Reasons Why.

He started to backpedal and softened his opinions a little bit.

James said his disappointment was due to the lack of “scares” for him. 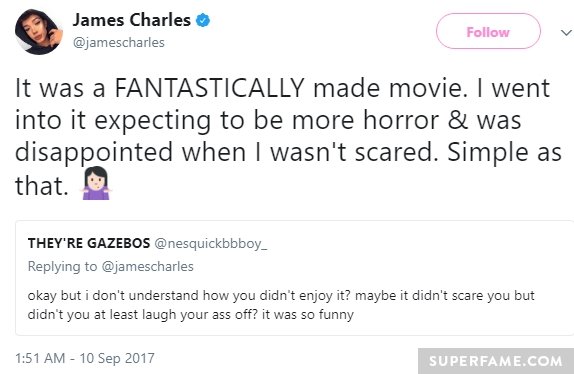 Fans got very defensive over It. In fact, many could not understand how someone else could possibly have a differing opinion. 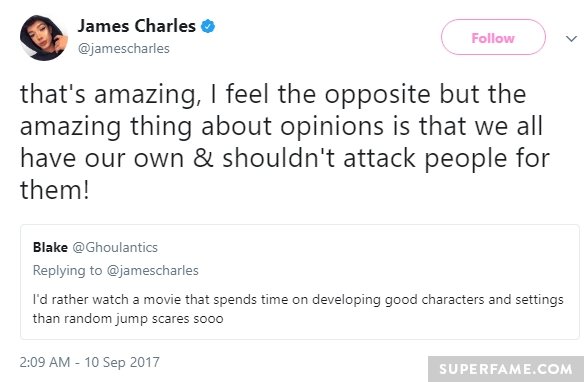 James was even forced to record a video message to talk about the It movie and the backlash over his opinions.

to address all drama regarding my comments on the "IT" movie pic.twitter.com/EtkNG474U3

What did you think about the movie?