Fans immediately went into the comments, accusing him of making a transphobic “sex change” joke with Will Darbyshire. Fans also accused Joe of “queer baiting” with his #Jaspar thumbnail choice.

Joe Sugg Expresses Disgust at #Jaspar Fan Photoshops, Then Uses Them for His Thumbnail

In Joe’s graphic novel announcement video, a fan asks Joe’s opinion on some photoshopped fan photos of Caspar and Joe making out.

Update: As a result of backlash, Joe removed the original thumbnail and replaced it with this.

“Stop it! It’s getting so creepy. Please, PLEASE stop with all these WEIRD, fanfictional edits of me and my roommate kissing. It’s just weird,” Joe replies.

Despite his apparent dislike of the kissing photos, he decided to use them for his thumbnail with the label, “MY BIG ANNOUNCEMENT!”

Will Darbyshire Makes A “Sex Change” Joke, Joe Continues It

“The announcement is that I’m…” Joe begins. “Having a sex change,” Will says off-camera.

“Don’t be stupid, Will. That’s next week’s video,” Joe continues.

YouTubers & Fans React to the Video, Call It “Damaging” & “Transphobic”

“Don’t capitalize on minorities with a history of repression,” he continues. 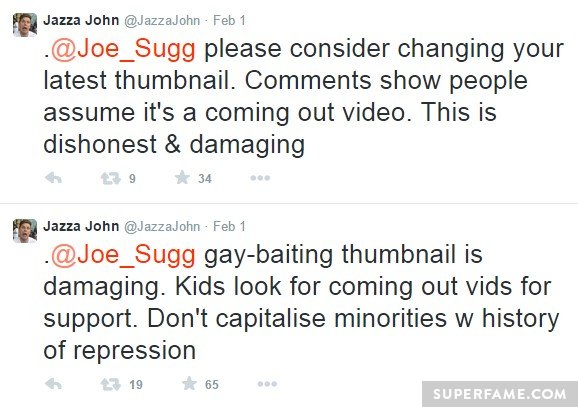 He also made an entire video about it, shown below.

“Gay-baiting is exactly what Joe has done in this video, and I think he knew precisely what he was doing, because he apologizes for it in the video. Come on mate!” Jazza says.

Queerbaiting is usually used to describe when television shows & movies add h********* tension between multiple characters to appeal to a gay market – then denying it, playing it off as a joke, with no intention of them ever getting together.

Jazza then tells viewers to think of the children, and the possibility that a gay kid might see the video and think it’s a coming out video. “And then shoot down the possibility of them being queer as weird, or gross – that’s what makes me angry.”

Many took offense to the thumbnail and apparent queerbaiting.

Others took offense at Will & Joe’s “sex change” punchline, calling it “transphobic”.

Others didn’t find the thumbnail that offensive at all.

What do you think about this? Is it overblown or deserved?