Maggie Lindemann has hit back at Cameron's claims she is using Carter Reynolds. (Photo: Twitter)

On a YouNow stream, Maggie decided to brand Cameron Dallas “talentless”. While she later apologized on Twitter, she clearly meant what she said.

“These people aren’t famous! They’re literally on social media. They aren’t famous,” she said. “You gotta have a talent!”

She then calls Cameron Dallas, Matt Espinosa, and a few other Viners “talentless”.

Predictably, fans of Cameron and the boys were not happy with her words.

After the severe backlash, Maggie decided she needed to apologize.

“I’m really impulsive. That’s why I always respond to all the hate I get. When I see hate and stuff, I am so quick to defend myself – like I don’t even think of what I say before I say it. I just react very quickly.” 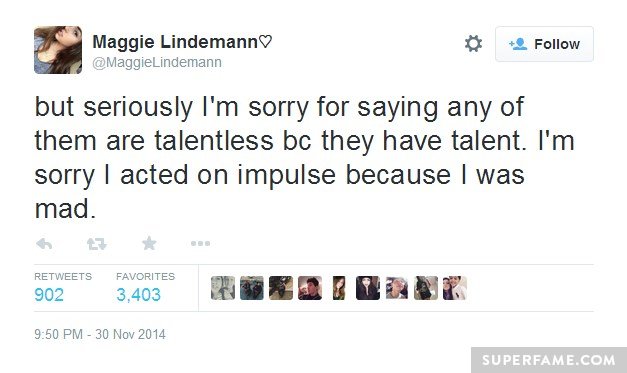 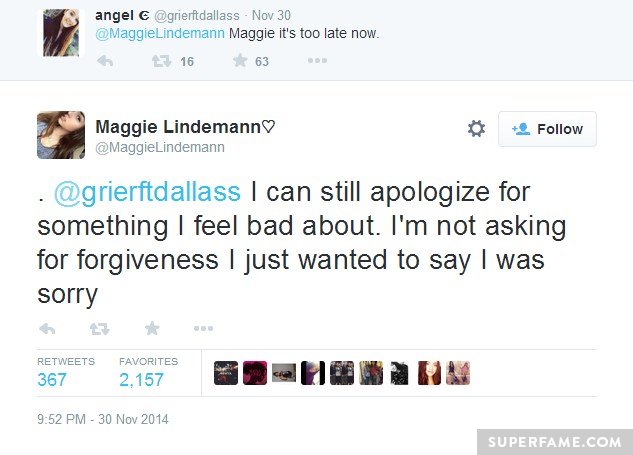 But Is Maggie Actually Sorry?

She decides to call Cameron talentless for the second time, but then praises Shawn Mendes for having talent – unlike Cameron.

“Like Shawn, he has talent, he deserves fame. He does stuff. And he’s like really talented too.”

“Everyone is going to take Cameron’s side, because he’s Cameron. And I am just the girlfriend.”

“People say I am using Carter for fame and stuff. But people don’t understand. I DON’T CARE about being famous!”

“Before I dated Carter, I rarely got any hate. And I had a lot of followers.”

“Now, I literally can’t look in my timeline without seeing stuff like ‘kill yourself’. Stupid stuff. Shut up! Why do you waste time tweeting about me?”

“[Cameron] says I am using Carter, but like – using him for what?” She rolls her eyes and flips her hair. “Not you.”

“I’m not freaking using ANYONE!”