There has been a ridiculous amount of Magcon drama today – but we’re not quite finished just yet!

The weekend Magcon battle royal went up another gear after Matt decided to take on Carter.

Remember when Carter Reynolds fired off some tweets at Jack Johnson and called him a “fool”?

Well, Matt Espinosa accidentally thought Carter was indirecting him instead. So he fired back at Carter.

He called Carter a “fool” and quoted his tweet.

Matt also saw the following tweet from Carter, accusing “the other guys” of being shady for no reason.

Matt then accused Carter of being a “hypocrite”. “Carter hates shade – but then shades!”

Matthew Espinosa appeared to have a Twitter epiphany! He decided to backpedal and deleted his confrontational tweets.

He went on another rant – this time, about kindness! He urged fans to change the “trend” of rudeness. “Only positive vibes!”

He suddenly appeared supportive of the New Magcon, despite shading them for months.

He channeled Oprah by encouraging his generation to “be the best it can be”. 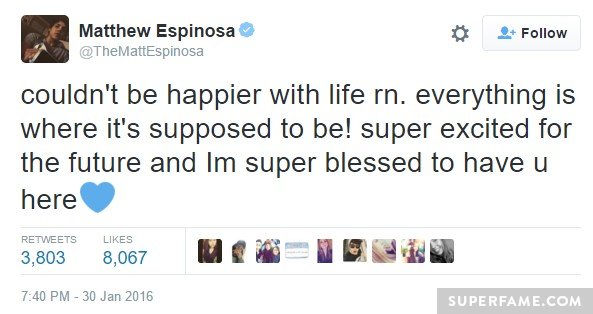 Although Sammy did not directly reference anything, all his replies accused him of shading the New Magcon.