Pewdiepie shocked the internet with his n-word video. (Photo: Instagram)

Pewdipie was caught in a race-related controversy after he blurted out the n-word in a video posted to his channel.

2017 Update: He was caught again saying the n-word in a Twitch steam.

Earlier, Pewdiepie posted a brand new video titled “I Won An Award”. You can watch it below!

In the video, he reads out a bunch of tweets from haters calling him “ugly” as a setup to the main content of his video.

He eventually “stumbles” upon a video by TC Candler about “The 100 Most Handsome Faces of 2016”. “Wow! Look at these attractive people!” he exclaims.

“They are so beautiful, I will never be this beautiful! Why, WHY was I born with such a Swedish face?!” He continues to compliment the handsome men. “Adorable! So cute!”

A little while later, Felix is “shocked” when he sees his OWN handsome face at #18 on the list, and he screams! While he screams and spins on his chair, he also blurts out the n-word.

#PewdiepieIsOverParty Trends on Twitter as People Call Him Racist

Many were outraged by Felix’s video, resulting in that hashtag trending worldwide.

“If you are not black, then do not use the word! Very simple concept whites are too dumb to understand,” one girl wrote.

“If you are NOT black, do NOT say the n-word. Period!” one person tweeted.

Others wanted Pewds to “own up to his fuck up” by apologizing. “I do not think he will really be over since he’s the biggest YouTuber, but he needs to own up.”

As more and more of his fans started to defend him in the hashtag, people weren’t happy. “Non-black people on this hashtag need to shut the fuck up and stop telling black people how to feel.”

“How can Pewdiepie be racist if he has a black dog?” one fan joked.

Many fans tried to change the subject and deflect by bringing Donald Trump into it.

Others tried to defend the use of the n-word by arguing about the meaning of racism.

Pewdiepie’s initial reaction to the racism backlash was seen on Twitter. He re-tweeted this message from Idubbbz featuring the n-word.

He also liked this tweeted video from Bunty King that claimed Felix was “allowed to use the n-word” because “he used it in a funny way”. 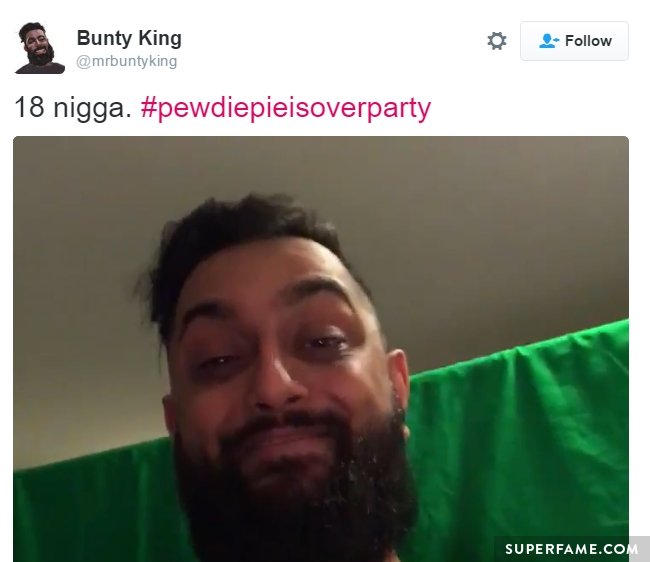 Do you think Felix should or shouldn’t apologize?