Roman, Yousef, and most major pranksters are often “called out” for staging pranks by fans.

Even the Daily Mail recently called out Roman Atwood for his recent “blow up my kid” prank.

Philip DeFranco made a video about Adrian Gee, that Aussie prankster who was exposed for faking pranks.

Philip’s video has already been taken down, but was originally titled YouTube Prankster Exposed as Fraud.

In the video, Phil said that most YouTube pranks were fake anyway, so it was not very surprising.

He specifically called out FouseyTUBE and Roman Atwood for being prank-fakers.

“The only reason I do not talk about people I don’t like… or don’t reply to people when they fire shots… is because I don’t want to give them any relevance, because they are desperate.”

“Y’all know I do not hold back on anything, so I am just contemplating whether or not I want to give Philip DeFranco any kind of relevance and talk about him in tomorrow’s vlog.”

“Like, if some lame, like many in the past have, tries to take a shot at me, and I reply – I let all my supporters see who they are, which gives them relevance!”

“With that being said, if you have to hate on someone to give yourself any kind of relevance, you’re a d*** desperate a** lame. Sit down, fool.”

Somebody Takes Down Philip’s Video With a Copyright Claim

Philip announced that his original video was taken down by a copyright claim. He did not mention who did it. “So THAT’s how you’re going to play it?” he tweeted. 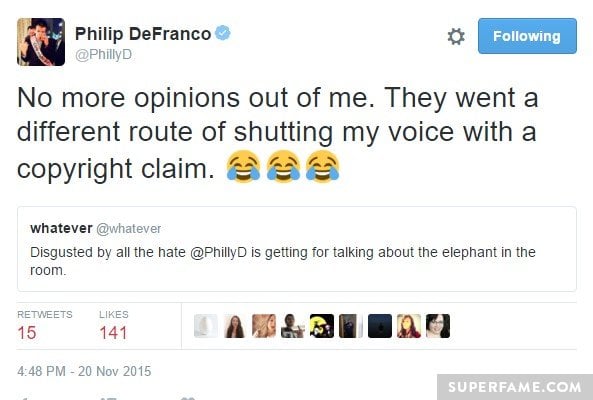