Jeana and Jesse Wellens are having a relationship crisis. (Photo: YouTube)

On their vlog channel BFvsGF, PrankVsPrank (PVP), otherwise known as Jeana and Jesse Wellens, have revealed that their relationship is on the rocks.

2016 Update: Jesse and Jeana announced they were temporarily breaking up again!

While many vloggers prefer to keep their relationship troubles out of the public eye, the pair have decided to air out their dirty laundry.

They go into more detail in a comment they made on the latest vlog.

On the vlog, Jeana took to the comments to explain everything.

“Sometimes there is sadness within ourselves that feels like our relationship is tearing apart,” she posted.

They announce that they have “many relationship issues” , and and might sometimes reduce their vlogging schedule just in case some tough days “tear them apart”.

On these non-vlog days, they feel that they will be better able to focus on their relationship. 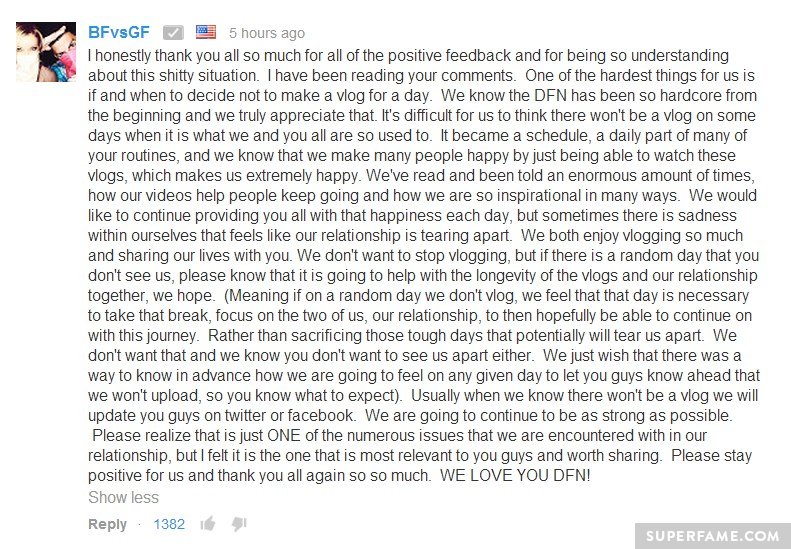 Fans React to the Announcement

Other fans drew comparisons with Anthony and Kalel’s recent split – and did not want to see it happen to them.

Some fans supported their decision fully.

Other fans were incredibly devastated.

On the other hand, some viewers decided to play the blame game. One told Jeana that it was “her fault” for being “demanding and bossy” to Jesse.

Another fan encouraged them to split up, as they felt Jesse was too immature and childish for Jeana.