Anthony, like Kalel, has recently upped his pro-animal activism. While Kalel is doing YouTube videos for PETA, Anthony’s activism primarily consists of attacking his meat-loving tween fans on Twitter.

For example, just a little over a month ago, Anthony drew comparisons between the meat industry to slavery and the Holocaust – drawing ire from a lot of his fans.

Anthony Compares the Meat Industry to the Holocaust & Slavery

For some reason, Anthony decided to tweet that animals are treated “worse than the Holocaust” in reply to a fan.

He also decided that it would be a good idea to evoke slavery during a debate he was having with a fan. 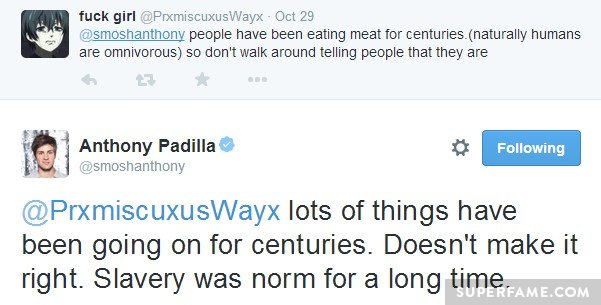 Anthony’s holocaust statements caused quite a lot of furor.

Others, however, thought Anthony was completely in the right to juxtapose the Holocaust with meat production.

However, Anthony’s slavery comparison was far more clear-cut – with not a single person defending him.

Where Did Anthony Get These Ideas From?

PETA has drawn the ire of the United States Holocaust Memorial Museum, the Anti-Defamation League, and countless other vegan activists for being “offensive” and “outrageous”. Their ads were even banned in Germany for trivializing the abhorrent and terrible nature of the Holocaust.

Prominent animal rights activist, and founder of Jews for Animal Rights Roberta Kalechofsky objected to the use of such imagery. “People do not eat, hunt or experiment on animals because they hate them,” she says. “Those were the Holocaust motives. There is no theological or ideological conflict with animals.”

Do you agree with Anthony? Or is this just offensive? Comment below!