Taylor Caniff and Taylor Alesia made out. (Photo: Twitter)

Taylor Alesia recently outed her “relationship” with beau Taylor Caniff by defiantly posting a photo of them kissing at the beach on Twitter.

As many know, Taylor Caniff has repeatedly denied that he’s officially dating or seeing anybody.

“I’m doing this because I’m hurt. Why keep me a secret?” she says.

She also made a variety of claims on her Younow stream, including claims that Taylor Caniff is threatening to sue her for posting the photo – as she might have illegally “stolen” it from his phone.

She also claims that she was pressured by Taylor and his manager to keep quiet – but she has finally had enough of them.

For reasons that will be explained further down, Taylor Alesia posted the following photo on her Twitter account. “#Throwbackthursday,” she captioned.

“That picture was taken around two weeks, maybe a week before the tour ended,” she explained on her Younow stream.

“First, he was a little upset. We hadn’t spoken in the last 4 days before I posted the picture.”

What Prompted Taylor Alesia to Post the Photo in the First Place?

The drama went down around the time Taylor Caniff ended his RV tour. Alesia felt sidelined, and went on the offensive.

“What made me really upset…he promised me that he was going to text me every day. He was going to fly me out to Texas, right after the tour. He texted me the day after that, and then stopped.”

“Then I got a bunch of tweets and comments that his ex-girlfriend was at his tour in Texas.”

Alesia is referring to Ashley Wilson. “There was a quarrel between me and her.”

“We were pretty much ‘a thing’ on the tour,” she says. However, she also says they were not officially “dating”.

“We’ve been talking on and off for the last 8 months – whether he wants to tell you guys or not. He’s just going to keep lying about it, I guess.”

“I held it in too long. I can’t do it anymore. He knows what he said to me. He knows exactly what he’s doing.”

Taylor Alesia also claims that she felt pressured by Taylor Caniff and his management to keep their “relationship” a secret.

“I should have my freedom, too. I should be able to say what I want to say.”

Taylor Caniff was not happy that Taylor Alesia spoke out about him.

In one tweet, he swore on his little brother Tristan’s life: “I’m single as hell, I put it on my baby brother Tristan – I have never dated her! She’s lying.”

“This girls want to like be popular off me I don’t get it anymore,” he also tweeted.

He later deleted some of these tweets.

“Taylor is saying he wants to sue me, telling me it’s against the law, that I went on his phone and like, sent that photo to myself.” 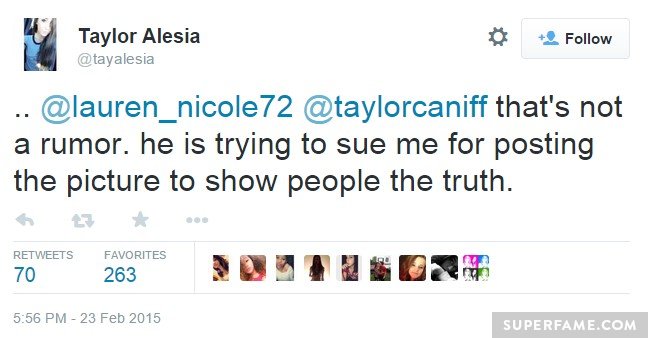 She also tweeted, “He’s trying to sue me for posting the picture to show people the truth.”

“We took pictures on MY phone! It doesn’t matter. There’s other photos I could have posted.”