Trisha Paytas has defended herself against racism accusations. (Photo: YouTube)

Trisha Paytas thought she was making an innocent Leonardo DiCaprio music video tribute, but got more backlash than she bargained for.

Trisha initially shot to fame as a professional troll, and has previously caused controversy with topics including, but not limited to: Hitler, molestation, rape, animal rights, gay people, black people, Mexican immigrants, women and Jews.

It was no surprise that Trisha managed to stir up more trouble – and many fans accused her of trying to “sexualize racism and slavery”.

In the video, Trisha recreated scenes from various Leo movies, including the infamous Titanic drawing scene.

She also recreated scenes from Romeo + Juliet and even got wet for the iconic Titanic life raft scene.

However, it was her decision to sexualize Django Unchained that was more controversial.

She also posted a behind-the-scenes video.

Trisha Paytas Urges Leo to Whip Her “Like in Django”

“He could whip me every night, just like Django,” Trisha Paytas sang in the video. She wielded a whip to demonstrate.

She used the line in a sexual BDSM-related context.

She said she was dressed as “Coco”, who was a slave in the movie.

Many top commenters were outraged. “Please tell me you didn’t just do that,” one fan said. 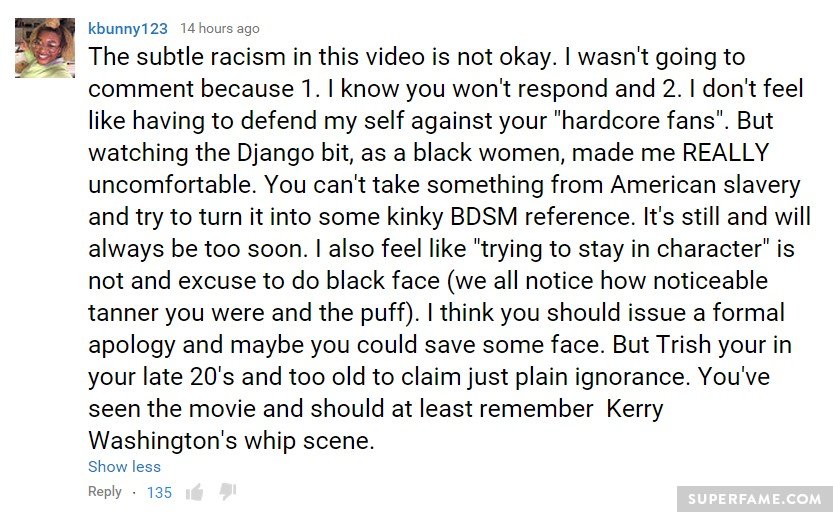 There were also Trisha defenders. “Get out of there you Tumblr scumbag,” one fan fired back.

Trisha Paytas Defends Herself: “It Is Not Racist”

“It was literally a joke. The whole song is light-hearted…it is NOT racist. Just because a character I liked in the movie was played by a black actress, why can’t I dress up as her?”