Tyler Oakley – who clearly knows that the Christmas season is all about friendship – has taken to defending best friend Zoella from a random 16-year-old on Tumblr.

It all began when Tumblr user Kaleidanscope decided to post a vicious critique of Zoella’s record-breaking novel in a Tumblr post.

16-year-old fanfiction writer Lauren – who appears to enjoy Dan and Phil fanfic – decided, for whatever reason, to pen a 3,503 word essay detailing all the “wrong things” in the first chapter of Zoella’s Girl Online after Zoella released the first chapter for free on her Facebook page.

She lists 58 different critiques (most rather nitpicky) in an effort to slam Zoella’s book.

Tyler Oakley got wind of this, and decided he needed to put the Tumblr teenager in her place.

Tyler Oakley dropped into the user’s ask box, and sent over a message.

He says, “Imagine if you used all the time spent on finding faults with Zoe’s book to work on writing your own creations. Wow – that would have been far more productive.” 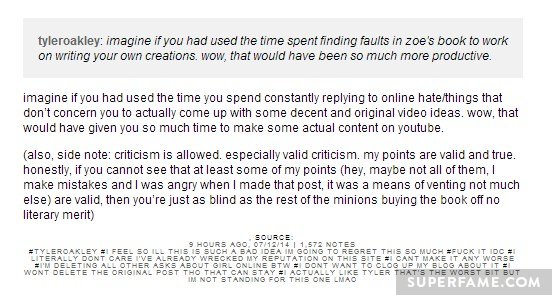 Lauren immediately fired back at Tyler, accusing him of “unoriginal” video ideas and replying to online hate that “doesn’t concern him”.

She then admits she was “angry” when she made the 3,503-word critique of Zoella, and accuses him of being “blind” like the “minions that buy the book of no literary merit”.

Tyler was quite taken aback by her angry tone, and replied in another ask.

He said, “I have seen your response and it seemed heated.” He revealed his intention was not to attack her or be malicious.

He encourages her to channel her energy towards “creation”, rather than destruction – and ends his final message with “support and kindness”. 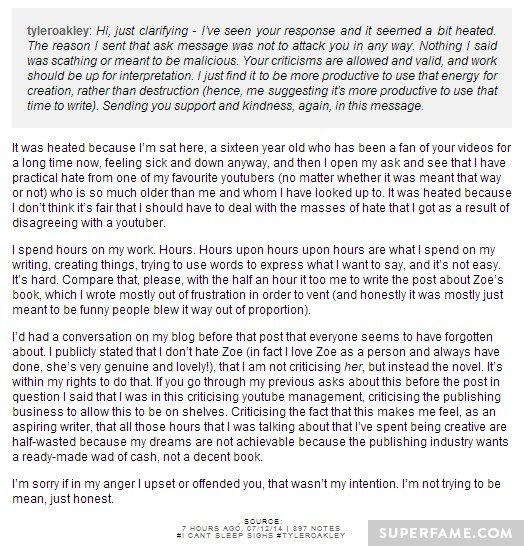 Lauren then explains why she was furious.

Is Lauren or Tyler in the right? Comment below!