Vegan hero Kalel Kitten has outraged both her vegan and omnivorous fans, by expressing willingness to cook and eat her own cat Buki on Twitter.

She doesn’t stop there, and then claims people should not eat pigs, as they can play video games.

Kalel’s recent bout of hyperbolic exclamations are similar to ex-fiance Anthony Padilla’s – like when he compared meat-eating to slavery and the Holocaust.

Kalel Announces She Is Willing to Eat Her Cat

For some reason, Kalel suddenly decided to tweet a hypothetical situation in which she has “a gun pointed to her head”.

She explains that the gunman is forcing her to pick between eating her cat Buki, or a cow – or she’ll die.

How will Kalel decide who most deserves to be eaten? By the animal’s level of intelligence, of course. 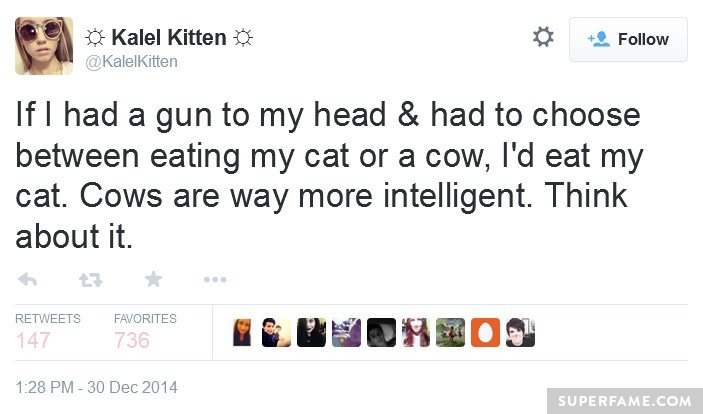 This polarizing tweet baffled and outraged both her PETA-loving and PETA-hating fans.

On one hand, animal lovers were appalled that she was insinuating that certain animals were somehow inferior or superior to each other when it came to eating them. “How about don’t eat ANY animals,” one animal-loving fan fired back.

“Going by that logic, I’d eat you,” another fan said – a jibe insinuating she is less intelligent than a cow or cat.

Others didn’t even know how to respond. “What the f*ck,” many said. 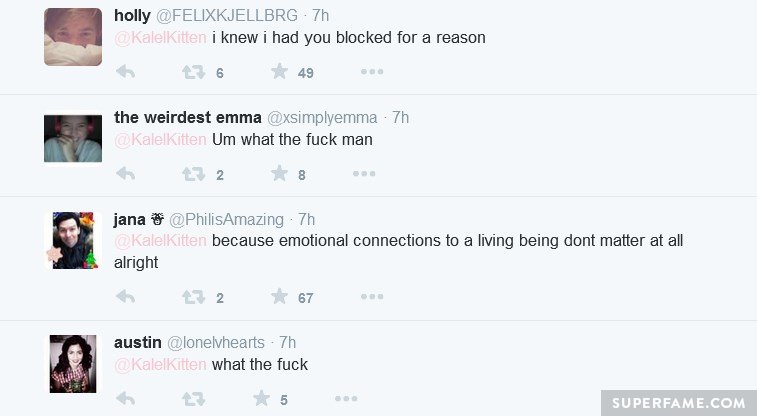 She continued by exposing the hypocrisy of people unwilling to eat their pets, but were willing to eat tasty bacon. She mentions pig intelligence as a reason. 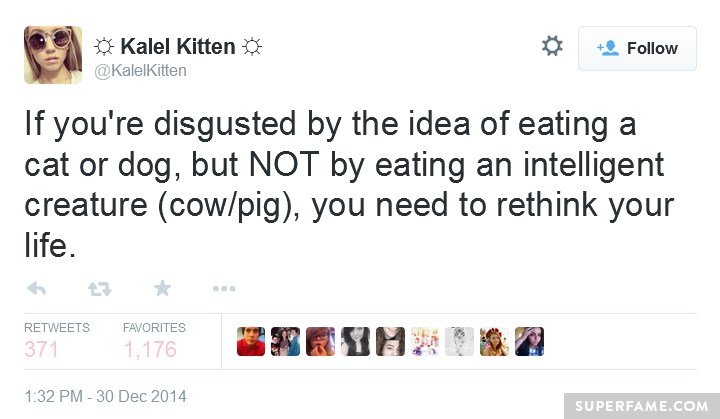 Not content with her rant, Kalel continues by insinuating that her fans should not eat pork, as pigs can play video games.

Again, both animal-loving and animal-eating fans were offended by this tweet, and her attempt to insinuate cats are more “worthy” of being eaten than pigs due to their low intelligence.

On the “pigs can play video games” front, many fans thought Kalel had gone over the deep end.

The video games tweet was so badly received, that she deleted it.

Kalel is repeating common PETA talking points. In one blog, PETA references an experiment by Penn State University and Stanley Curtis where pigs were able to play joystick-controlled games.

Pigs are commonly thought to have the intelligence of a 3-year-old human baby.

Would you eat your pets? Comment below and tell us.