Ingrid Nilsen breaks down in tears and reveals a secret. (Photo: YouTube)

After years of personal conflict and soul-searching, Ingrid Nilsen has finally revealed one of her most emotional secrets.

“I was living this quietly unhappy life,” Ingrid reveals. “I was telling myself that I wasn’t worthy of happiness.”

Ingrid Nilsen Comes out as Gay

“There’s something that I want you to know, and that something is…I’m gay,” she says in her coming out video.

“It feels so good to say that,” Ingrid says through tears. “I’m shaking right now.”

“This moment is real, and it’s here. I have been waiting for this a long time.”

When Did Ingrid Realize She Was Gay?

“It is something that I have always known from like, my earliest memories.”

“It’s hard to put that into words to describe that. It has always been there. This is not something that I chose.”

“It is something that is a part of me.”

She says she has known since she was four years old. “All my crushes were exclusively on girls…I was staring at girls in my classes.”

Why Did She Date Men?

“I can care about a man, but I cannot be in love with a man.”

“I grew up in an environment where homosexuality was not universally accepted.”

“It was accepted by some, but definitely not the majority. And that was difficult.”

“I felt the need to take this part of me, and put it in a cabinet, and lock it up. I was seeking love and approval.”

“The last man that I was with, and will ever be with, has just been so kind and respectful and supportive through all of this.”

Ingrid Says She Has Been With Women

“Between relationships with guys, I have had encounters with women.”

“This is not intimate details of Ingrid’s sex life.”

“When I have kissed girls…it felt… oh my god… like, this is what I am supposed to be doing.” 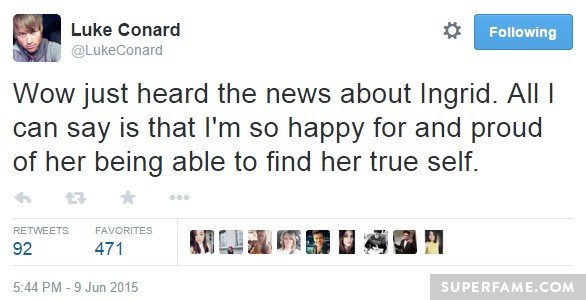