Last week, Carter and Maggie already clashed on Twitter. Maggie revealed that Carter was still trying to reconnect with her, and even tried contacting her mom.

A few days ago, Maggie tweeted a shocking cryptic message, but nobody knew who it was about (fans just assumed she was talking to Carter). “I f***** with your best friend… now you’re hitting me up?”

Carter Reynolds decided to have another go at his ex Maggie. He accused her of allegedly “talking with” and “hooking up” with guys while she stayed at his place.

He also claimed that Maggie tried to get back together with him.

Why did Carter decide to reveal this? Revenge.

He said that Maggie was spreading lies about him. “She ALREADY put enough s*** out there!”

He accused Maggie of trying to make him “look bad” on social media.

He warned Maggie’s suitors that “she will talk to anyone”. “Don’t feel special.”

He also hit back at haters.

Carter also decided to like a bunch of anti-Maggie tweets.

He confirmed Maggie’s previous claim that he was trying to reconnect with her.

Someone called her a psycho and a hypocrite.

He also liked his ominous tweet. “One day, I hope people see who you REALLY are!”

Maggie Thinks She’s the Hottest Girl Carter Will EVER Date

She also liked a series of anti-Carter tweets. “When you’re bitter because the hottest girl you will ever date left you!” 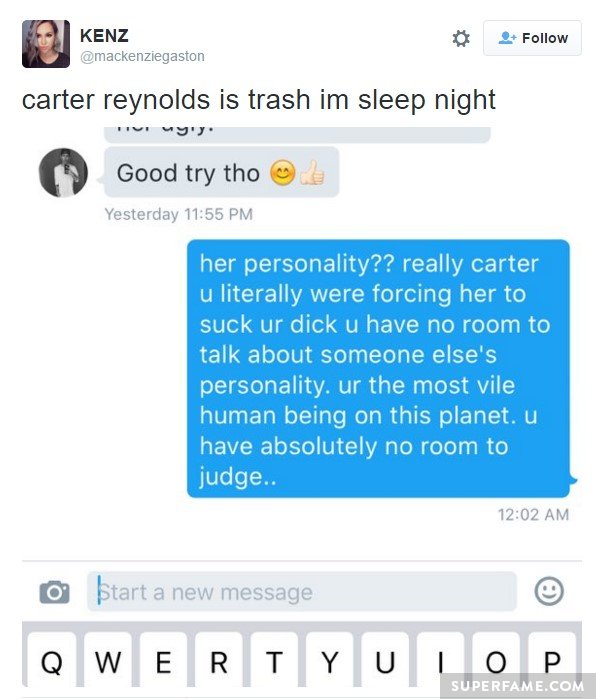