Jesse Wellens recently announced that his mother has been missing for a few days, and urged fans to help find her.

Update: Jesse’s mother has passed away.

Unfortunately, she has not been found yet. Jeana took to YouTube and posted a new video with a few more details. “Today, we are asking for help. We are still trying to find her.”

“People on Twitter have been saying kind words and prayers to us. So we really appreciate that. We just want to spread the word about this.”

“Jesse’s mother has been missing for three days now. She suffers from severe depression. She left her phone behind, so nobody has been able to contact her. Extremely worried about her.”

“Nobody has been able to find her or talk to her. We have been in close communication with his family, the police, friends, and detectives.”

“There has been a missing persons report filed. She hasn’t turned up, still.”

“Something else that we did not tell you guys about, is that about two weeks ago, Jesse’s grandmother passed away. It was really difficult for us, because we were in Los Angeles. It made us feel like s***. So, on top of that happening, now two weeks later, we are worried about his mom.”

“We are afraid that because she suffers from depression so much – and we know she was really sad and depressed about her mother passing away – we worry that she may have tried to take her own life.”

“His mom was last seen in Willow Grove, Pennsylvania. Nobody has been able to contact her. We think she was in her vehicle, which is a 2000 Lexus RS Light Gold, with the license plate NPY89T.” 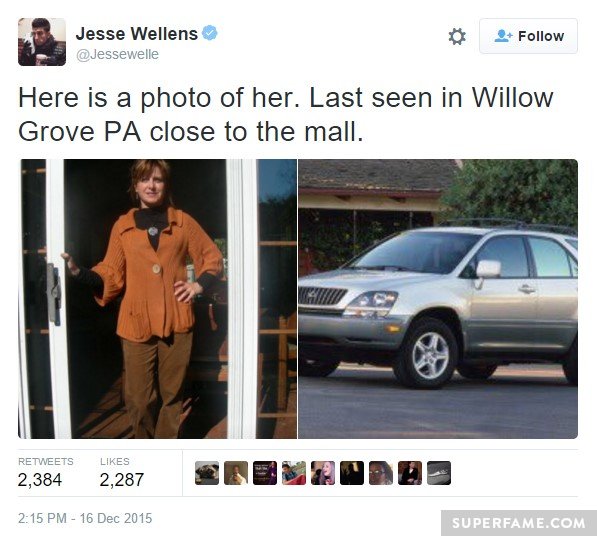 Jeana Apologizes for Not Vlogging

“I don’t know when we will have a regular vlog up again. We are trying to get through this right now. It has not been easy to do anything at all. Let alone try to film our day.”

“Tomorrow, we will be uploading an [old] challenge video. We just don’t want you to think that we’re out having fun doing collab videos while this whole situation was going on.”

“We hope that you guys can be understanding in this situation.”