Sam Wilkinson found himself in a drug-related controversy after he insinuated that he was in possession of cocaine.

He was forced to apologize after posting a Snapchat, in which he called a white substance “co co”.

Hayes Grier was also recently caught out on Snapchat in a similar scandal, caused by Taylor Alesia.

Sammy Wilk Insinuates Cocaine Is on a Plate, in a Snap With Stassie

Sammy zooms onto a black plate with mysterious white substance, and a card.

Sam then insinuates the substance is cocaine. He says, “She’s in love with the co-co!”

He pans over to Stassie and says, “Yo, come on, man. Don’t let her beat you in Fifa! Can’t let her do that to you.”

Without much to go on, fans immediately started calling him a cokehead.

Not Cocaine: It Was Actually Salt

The substance is eventually revealed to be salt, in another Snapchat.

Sam can be seen licking it off a plate after losing in Fifa. “Hehehe beat him! Sammy is so salty.”

Sam apologizes upon waking up. “Hahaha! What the fuck did I wake up to? Rumor has it, I’m a coke head now! … Apologies for the confusion caused last night.”

Although Sam started the rumors himself, he also scolds fans for “spreading rumors”. “Just know the whole story before you assume things please. So wild how rumors get spread.” 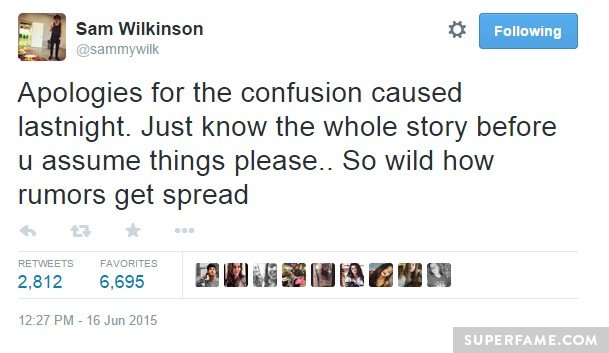